BRUSSELS (Bloomberg) - The US, UK and France launched strikes on Syria a week after US President Donald Trump said there would be a "big price" to pay for the apparent use of chemical weapons by President Bashar al-Assad's forces in the town of Douma, an attack that killed scores of civilians.

Here's what we know and what's still to come:

What did they attack?

The US said 105 missiles were fired against three targets in Syria, including chlorine and sarin gas research facilities, and that Assad's capacity for chemical warfare had been "significantly degraded." Lieutenant General Kenneth McKenzie, director of joint staff at the Pentagon, called it a "proportional, precision" attack.

McKenzie told reporters on Saturday that none of the missiles were shot down, and there was no indication Russian air defences stationed in Syria were used.

Russian General Sergei Rudskoi said earlier that Syrian systems had intercepted about two-thirds of the missiles.

Trump summed up the action on Twitter in two words: "Mission accomplished".

Still, "this was not geared towards weakening Assad's conventional military capabilities," said Kamran Bokhari, a senior fellow with the Center for Global Policy in Washington. It was "a little more than the symbolic strike from last year but steering clear of any major operation."

How did Syria react?

The attack "was a victory for Syria," former lawmaker Sharif Shehadeh said by phone from Damascus.

"Instead of weakening the government, it only made it stronger," he said.

"Trump did it to save face."

Assad's allies, including Iran and Lebanon's Hezbollah group, condemned the strikes. Iran's Supreme Leader called the attack a crime and the country's Revolutionary Guard Corps said it gave "the resistance a more open hand," although it did not threaten to retaliate.

On the ground in Syria, armed forces liberated Eastern Ghouta after driving out the remaining armed groups from Douma, the Al Mayadeen television network reported, citing a statement by the Syrian Army. 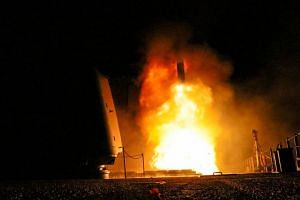 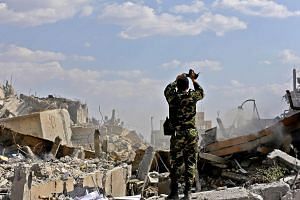 US strikes leave Syrian peace process right where it was

Are the attacks over?

UK Prime Minister Theresa May in a statement called it a "limited and targeted strike". US Defense Secretary Jim Mattis said that "right now, this is a one-time shot and I believe it has sent a very strong message to dissuade him, to deter him."

Still, Trump warned in his televised address of a readiness to "sustain this response until the Syrian regime stops its use of prohibited chemical agents," though he didn't specify what that meant.

And Trump's ambassador to the United Nations, Nikki Haley, said the US is "locked and loaded," and ready to punish Syria again if it keeps using chemical weapons.

How did Russia respond?

Russia denounced the attacks as aggression against its ally, but there was no sign of an immediate military response.

"Our worst apprehensions have come true. Our warnings have been left unheard," Anatoly Antonov, Russia's ambassador to the US, wrote on Facebook.

"Insulting the President of Russia is unacceptable and inadmissible," he added, an apparent reference to Trump's mention of President Vladimir Putin in his speech.

The Kremlin released a statement from Putin saying the strike was an "act of aggression against a sovereign state which is in the front line in the fight against terrorism," and that there was no proof a chemical weapons attack had taken place.

The strikes appeared to have taken place far from Russia's bases near the Syrian coast.

US officials said they gave Russia no specific warnings of the attacks or the targets, but used the usual hotline with Moscow's military to ensure the airspace was clear.

President Emmanuel Macron, who called Putin on Friday to discuss the situation, still plans to travel to a security conference in St Petersburg in May, where they are expected to meet, an official said.

The UN Security Council held an emergency meeting on Saturday at Russia's request at which it rejected Moscow's resolution to condemn the strikes.

What about the UK?

May on Saturday made her case for action in the face of opposition from much of the public and the Labour Party, saying in a statement it was highly likely Assad's regime had used chemical weapons.

"We would have preferred an alternative path, but in this case there was none," May said. "We cannot allow the use of chemical weapons to become normalised."

She authorised the strikes without parliamentary backing and it's not clear she would have got it if she'd sought it.

Parliament refused UK participation in a planned punitive raid on Syria in 2013, one of the reasons then-US President Barack Obama called it off.

While Germany did not take part, Chancellor Angela Merkel said on Saturday she supported steps taken by the allies.

"Military action was necessary and appropriate to safeguard the effectiveness of the international ban on the use of chemical weapons, and to warn the Syrian regime of further violations," she said in a statement.

May will address Parliament - where she doesn't have a majority - this week.

Opposition leader Jeremy Corbyn, a lifelong anti-war campaigner, has accused May of "waiting for instructions from President Donald Trump".

Macron said on Friday that France's parliament will hold a debate on the intervention.

Under the French Constitution, parliament must be informed within three days of all major military operations, but only gets a binding vote if they last more than four months. Macron's advisers said at a briefing on Saturday the strikes took place in a legal framework.