THE HAGUE (REUTERS) - The World Court ordered the United States on Wednesday (Oct 3) to ensure that sanctions against Iran, due to be tightened next month, do not affect humanitarian aid or civil aviation safety.

Judges at the International Court Of Justice (ICJ) handed a victory to Teheran, which had argued that sanctions imposed since May by the administration of US President Donald Trump violate the terms of a 1955 Treaty of Amity between the two countries.

But US Secretary of State Mike Pompeo rejected the decision. He said the United Nations court, often called the “World Court”, had no jurisdiction over the sanctions, which Pompeo said were essential to US security interests, and that Washington would “terminate” the little-known treaty with Iran.

“This is a decision frankly that is 39 years overdue,” Pompeo told a news conference. “Iran is abusing the ICJ for political and propaganda purposes and their case, as you can see from the decision, lacked merit.”

Pompeo said the United States had already taken steps to ensure that the sanctions, which it intends to tighten next month, do not impact humanitarian aid – regardless of the court’s ruling.

The court order issued on Wednesday is temporary pending a resolution of Iran’s full lawsuit against Washington by the ICJ, something that could take years.

Iran’s Foreign Ministry said in a statement “the decision proved once again that the Islamic Republic is right and the US sanctions against people and citizens of our country are illegal and cruel". 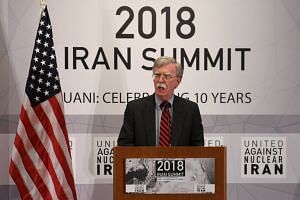 Bolton warns of 'terrible consequences' for those doing business with Iran

“The United States must comply with its international commitments and lift obstacles to Iranian trade,” it added.

The ICJ is the United Nations’ highest court for resolving disputes between nations. Its rulings are binding, but it has no power to enforce them, and both the United States and Iran have ignored them in the past.

The court said assurances offered by Washington to ensure sanctions do not affect humanitarian conditions were “not adequate”.

“The court considers that the United States must... remove by means of its choosing any impediment arising from the measures announced on 8 May 2018,” said Presiding Judge Abdulqawi Yusuf, reading a summary of a ruling by the 15-member panel of justices.

The sanctions may not hurt “exportation to the territory of Iran of goods required for humanitarian needs such as medicines, medical devices and foodstuffs and agricultural commodities as well as goods and services required for the safety of civil aviation,” he said.

While US sanctions “in principle” exempt food and medical supplies, the court said “it has become difficult if not impossible for Iran, Iranian nationals and companies to engage in international financial transactions” to purchase such goods.

The Trump administration argued last month that Iran’s request was an attempt to misuse the court and that the 1955 treaty specifically ruled out using courts to resolve disputes.

The treaty was signed long before Iran’s 1979 Islamic Revolution which turned the two countries into arch-enemies.

US State Department Legal Adviser Jennifer Newstead had said Iran’s real quarrel was its frustration over the US pullout from the nuclear pact, under which Teheran restricted its disputed uranium enrichment programme under UN monitoring in exchange for a lifting of most international sanctions.

Trump’s unilateral move has put it at odds with the other signatories to the deal, including Washington’s close European allies Britain, France and Germany as well as Russia and China.

Washington nonetheless plans to pursue a new series of sanctions due to go into effect Nov 4 aimed at curtailing Iranian oil exports, the lifeblood of its economy.