Sirens were sounding inside the Green Zone. Police sources told Reuters at least one of the rockets fell 100m from the US Embassy.

The attack came nearly 24 hours after Teheran launched ballistic missiles at Iraqi bases housing American and other coalition forces, which did not cause casualties.

The strikes were in retaliation for a US drone strike that killed top Iranian general Qassem Soleimani and Iraqi commander Abu Mahdi al-Muhandis last week.

Muhandis had been the deputy head of the Hashed al-Shaabi, a web of armed groups incorporated into the Iraqi state but which also have close ties to Teheran.

The United States had accused Hashed groups of being behind a string of rocket attacks on the US embassy in Baghdad and bases hosting American troops across the country.

On Wednesday, the Hashed's hardline factions vowed that they, too, would take revenge for the US raid.

Paramilitary chief Qais al-Khazali - blacklisted as a "terrorist" by the US - said Iraq's response to the US "will be no less than the size of the Iranian response". 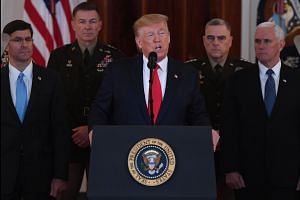 Trump says no US troops hurt in Iran strikes, Teheran 'standing down'

"To American soldiers: Do not close your eyes. Revenge for the martyr Muhandis is coming at the hands of Iraqis - until the last soldier among you leaves," it said.

The two rockets were fired as US President Donald Trump on Wednesday tempered days of angry rhetoric and suggested Iran was “standing down”, as both sides looked to defuse the crisis.

He said the US did not necessarily have to hit back at Iran’s attack on military bases housing US troops in Iraq. The Pentagon said Iran had launched 16 short-range ballistic missiles, at least 11 of which hit Iraq’s Ain Al-Asad air base and one that hit a facility in Erbil but caused no major damage.

“The fact that we have this great military and equipment, however, does not mean we have to use it. We do not want to use it. American strength, both military and economic, is the best deterrent,” Mr Trump said.

“Our great American forces are prepared for anything. Iran appears to be standing down, which is a good thing for all parties concerned and a very good thing for the world,” he said.