He has accused followers of his arch-enemy, US-based cleric Fethullah Gulen of being behind the coup, which has led to a wave of some 50,000 arrests and sackings of suspected conspirators.

The state of emergency was needed “in order to remove swiftly all the elements of the terrorist organisation involved in the coup attempt,” Erdogan said at the presidential palace in Ankara. 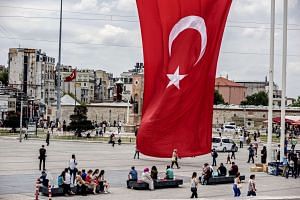 Although the special measure vastly increases state security powers, Erdogan vowed there would be “no compromise on democracy”.

The announcement followed long meetings of Turkey’s national security council and cabinet chaired by Erdogan at the presidential palace.

Turkey had in 2002 lifted its last state of emergency, which had been imposed in provinces in the south-east for the fight against Kurdish militants in 1987.

Article 120 of the constitution allows a state of emergency to be imposed “at a time of serious deterioration of public order because of acts of violence.”

Global concern has grown as Turkish authorities have arrested or fired troops, police, judges, teachers and other civil servants in the aftermath of Friday’s failed bid to seize power by rebel troops.

Earlier Erdogan lashed out at critics of his sweeping purges, telling France’s Foreign Minister Jean-Marc Ayrault – who had warned the Turkish leader not to use the failed coup as a “blank cheque” to silence his opponents – to “mind his own business”.

Earlier Wednesday, US Secretary of State John Kerry, flanked by allied foreign ministers, said that while “we condemn this coup”, it was important that the response to it “fully respects that democracy that we are supporting”.

And German Chancellor Angela Merkel’s spokesman, in more direct comments, said that in Turkey “nearly every day we are seeing new measures that flout the rule of law and that disregard the principle of proportionality”.

Erdogan in an Al-Jazeera interview insisted that the arrests and suspensions had been carried out “within the law”, adding that “of course that does not mean we have come to the end of it” – also voicing concern that the failed putsch may not have been “the end of coup attempt”.

The putsch left more than 300 dead and caused scenes of devastation, especially in Ankara where fighter jets and attack helicopters turned parts of parliament and the police headquarters to rubble.

The government has cracked down hard on alleged rebel soldiers, formally arresting 99 of 118 detained generals and admirals, and also placing in custody thousands of troops, with some later seen bruised and wounded.

Erdogan was in the Aegean resort of Marmaris when the coup struck and then, narrowly escaping the rebel soldiers, flew to Istanbul where he had stayed since, appearing before huge crowds of flag-waving supporters each night.

Turkish authorities have launched an operation to find 21 commandos who are suspected of the attack on Erdogan’s hotel.

Erdogan told CNN this week his life had been in grave danger. “If I stayed (in Marmaris) 10, 15 minutes more, I would either have been killed or kidnapped and taken away by them,” he said.

Ankara says the coup was masterminded by Gulen and the massive crackdown appears to be targeting individuals suspected of any connection to Erdogan’s former-ally-turned-foe.

Turkey has stepped up pressure on Washington to extradite him, sending several “dossiers” it says are packed with evidence about his alleged involvement.

Gulen issued a statement on Tuesday urging Washington to reject the extradition call and dismissed as “ridiculous” the claim he was behind the botched coup.

The 75-year-old reclusive cleric lives in Pennsylvania but retains vast interests in Turkey ranging from media to finance to schools and wields influence in various arms of the state, including the judiciary and police.

Asked if other countries could have been involved in the coup, Erdogan told Al-Jazeera: “There could be.” “The Gulen organisation has another superior mind, if u will, and the time will come when those connections will be deciphered,” said Erdogan.

In their first telephone conversation since the attempted overthrow, President Barack Obama pledged US assistance to Erdogan for the investigation into the putsch, which has threatened to once again raise tensions between the uneasy Nato allies.

The government says 312 people were killed in the coup, including 145 civilians, 60 police, three soldiers and 104 plotters.