But the outcome could more broadly influence all aspects of the country's future.

Coming 94 years after the foundation of modern Turkey by Mustafa Kemal Ataturk, the referendum was a landmark vote that could polarise society and affect Turkey's relations with the West, as well as the renewed conflict with Kurdish rebels.

Here are five ways the referendum could shape Turkey:

The referendum result, strongly contested by the opposition, gives President Erdogan enhanced powers, including the ability to appoint ministers and have an entire bureaucracy centralised within his presidential palace. 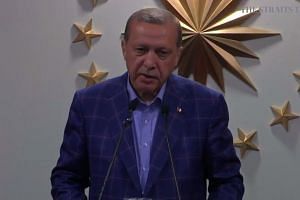 Opponents worry that the new system will lack the "checks and balances" that mark the US system, moving the presidency toward one-man rule.

The new system would be implemented from November 2019 when presidential and legislative elections are to be held simultaneously.

With the clock wound back under the new system, Erdogan, who became president in 2014, could serve two more terms, allowing him to stay in power until 2029 rather than 2024 currently.

The executive presidency system "amasses unprecedented power in the hands of one man," said Alan Makovsky, senior fellow at the Centre for American Progress. But Fadi Hakura, Turkey expert at London-based Chatham House think-tank, called the referendum result "at best a Pyrrhic victory" for Erdogan. "He's lost the major cities of Ankara, Istanbul, Adana, Izmir. He's lost the base of his support.''

Relations between Turkey, a longstanding candidate to join the European Union (EU), and its EU partners plunged to bitter lows during the referendum campaign as the president lashed out at Europe for what he said was behaviour reminiscent of Nazi Germany.

Erdogan has said Turkey's membership bid would be "on the table" after the referendum and in every single campaign speech. On Sunday, he said he might hold a referendum on reinstating the death penalty. Any country which has capital punishment on its books is automatically banned from joining the EU.

Erdogan could now move away from EU integration, a process which has moved slowly at best, and forge alternative strategic alliances, including with Russia.

Erdogan was the first Turkish leader to undertake peace talks with the outlawed Kurdistan Workers' Party (PKK), resulting in an unprecedented ceasefire. But the PKK truce shattered in 2015 and Erdogan has since waged a controversial campaign to destroy the group.

With only a narrow referendum win, the president "may feel compelled to be conciliatory," said Asli Aydintasbas, senior fellow at the European Council on Foreign Relations (ECFR). "Turkey could return to the peace process."

However the Yeni Safak daily has claimed that the government will open a new front with cross-border operations against PKK camps in northern Iraq, in a new effort to destroy the group.

Turkey's hugely diverse society has starkly polarised during Erdogan's tenure as prime minister and president since 2003. He has frequently demonised opponents, saying those who wanted to vote 'No' were playing into the hands of the PKK and US-based Muslim cleric Fethullah Gulen, blamed for a failed coup last July.

"He wins, but in the end half of the country is in love with him, and the other half loathes him, and herein lies the crisis of modern Turkey," said Soner Cagaptay, author of a forthcoming book "The New Sultan."

While Erdogan has forged a coalition with nationalists, he has in the past showed considerable pragmatism in his alliances.

Markets had been cautiously expecting a 'Yes' and hoping this will bring much-needed stability and a rally in Turkish assets.

In the medium term the prospects are much more uncertain, with some economists fearing that any democratic deficits in Turkey and increased polarisation in society, coupled with the government's loss of its enthusiasm for reform, will hit long-term growth rates.

"While a potential 'Yes' may be cheered by the market in the near term, Turkish equities are not likely to trade above historical averages as growth remains subdued and the long term implications of the system untested," said economists at BGC Partners in Istanbul.