BEIRUT (NYTIMES) - Syria's most powerful Kurdish militia has called on the Assad government to send its forces to protect against an attack by Turkey, the first sign of shifting political alliances in eastern Syria since President Donald Trump announced he would withdraw US troops.

At issue is an expanse of territory in the country's north and east that the United States, in partnership with local Kurdish-led militias, took from the militants of the Islamic State in Iraq and Syria group.

That put about one-quarter of Syria's territory, which holds valuable agricultural land and oil reserves, under the control of militias backed by the United States and supported by about 2,000 US soldiers.

It also angered Turkey, which sees Syria's Kurdish fighters as a security threat and has vowed to attack them in the near future.

Kurdish control of the region is also opposed by the government of President Bashar Assad as well as its Russian and Iranian backers, who want the territory to fall back under the control of Damascus.

For the most part, the other powers in Syria's multisided war have avoided attacking the area for fear of provoking the United States.

But Trump's surprise announcement last week that he would pull US troops out of Syria cleared the way for a possible scramble by those competing forces to take advantage of the resulting vacuum. 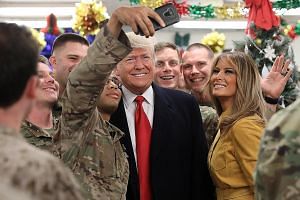 Trump defends pullout from Syria while visiting troops in Iraq

In a statement issued on Friday, Syria's most powerful Kurdish militia, the People's Protection Units, or YPG, called on the Syrian government to send troops to the city of Manbij to ward off a possible attack by Turkey.

The call was notable in that a US ally, the Kurds, was calling on an enemy of the United States to protect it against another US ally.

The Kurds see Trump's decision as a betrayal.

Fearing that the Americans would withdraw, Syria's Kurdish leadership had been in talks with the Assad government about reconciling.

Kurdish officials said on Friday that a preliminary deal had been reached over the deployment of Syrian troops in Manbij.