BEIRUT (AFP) - The wife of Syrian President Bashar al-Assad said in an interview aired late on Saturday (Aug 3) that she was "totally" free of breast cancer after a year of treatment.

"My journey has ended... I totally conquered cancer," said Asma al-Assad, sporting a stylish short haircut and a long white dress, in an interview broadcast on state television.

Since then, photos of her, thin and wearing a headscarf, have regularly been shared on the Syrian presidency's social media accounts.

In January, she underwent an operation at a military hospital in Damascus, according to the presidency.

In the interview, she described the "physical exhaustion" and other effects stemming from her treatment.

She praised the support she received from her children, her parents and her "life partner". 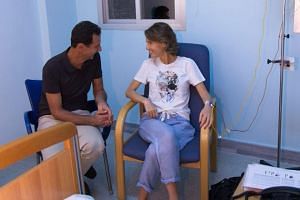 "Of course he was by my side," she said, referring to Assad.

The first lady, whose father is a cardiologist and whose mother is a diplomat, has two sons and a daughter with Assad.

Born in 1975 in Britain, the former investment banker styled herself as a progressive rights advocate and was seen as the modern side of the Assad dynasty.