DUBAI (AFP) - Global image messaging service Snapchat has scrubbed Qatari broadcaster Al-Jazeera from its app in Saudi Arabia at the request of Saudi authorities, the company said on Monday (Sept 18).

"We make an effort to comply with local laws in the countries where we operate," a spokesman for parent company Snap Inc said.

The request to block Al-Jazeera's Snapchat presence in the kingdom was made before the weekend, the company said.

According to Snap Inc, the Saudi Ministry of Culture and Information found Al-Jazeera's Discover Publisher Story channel to be in violation of local laws.

Saudi Arabia and its allies - the United Arab Emirates, Bahrain and Egypt - have been boycotting Qatar since June 5 in the region's worst diplomatic crisis in years.

They sealed the emirate's only land border, ordered its citizens to leave and closed their airspace and waters to Qatari flights and shipping. 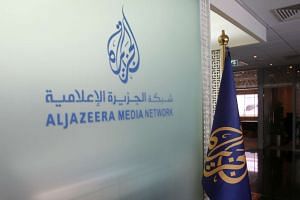 They also demanded that it close broadcasting giant Al-Jazeera.

Until now, Al-Jazeera's Snapchat channel can still be viewed in the United Arab Emirates, Bahrain and Egypt.

Saudi Arabia, with its bulging youth population, is among the world's top users of social media per capita. The Internet represents a limited space for freedom of expression in the conservative kingdom.