JALAZON REFUGEE CAMP , Palestinian Territories (AFP) - The parents and brother of a Palestinian toddler burned to death by suspected Jewish extremists were fighting for their lives on Saturday, as demonstrators held a second day of protests over the arson attack.

The firebombing of the family's home in the occupied West Bank that killed 18-month-old Ali Saad Dawabsha sparked an international outcry over Israel's failure to get to grips with violence by hardline Jewish settlers.

The child's father, Saad, was being treated for third-degree burns at the Soroka hospital in southern Israel, where a spokeswoman described his condition as "critical".

Mother Riham and four-year-old brother Ahmed were being treated at Tel Hashomer hospital near Tel Aviv, where a spokeswoman described their condition as life-threatening.

The family's small brick and cement home in the village of Duma was gutted by fire, and a Jewish Star of David spray-painted on a wall along with the words "revenge" and "long live the Messiah".

That was indicative of so-called "price tag" violence - a euphemism for nationalist-motivated hate crimes by Jewish extremists.

The arson attack followed days of tensions over West Bank settlements, with right-wing groups opposing the demolition of two buildings under construction that the Israeli High Court said were illegal. 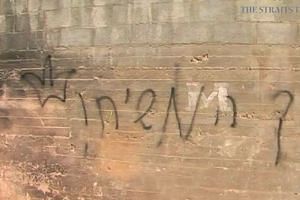 The demolition began Wednesday, but Netanyahu the same day authorised the immediate construction of 300 settler homes in the same area, angering Palestinians.

Erakat, who is also chief negotiator for peace talks with Israel, reiterated that the Palestinians hold the Israeli government "fully responsible" for the attack on the family.

"Settlement construction, impunity to crimes committed against the Palestinian people and incitement against Palestinian existence as a sovereign nation, including calls to recognize Israel as a Jewish state, paved the road for this terror attack," Erakat said.

Palestinian protesters took to the streets following the attack across the West Bank, including Israeli-annexed east Jerusalem, triggering clashes with the Israeli army.

On Saturday, dozens of Palestinians clashed with Israeli forces at the Jalazon refugee camp, where the funeral of Laith Khaldi had taken place.

Khaldi, 16, was shot by Israeli soldiers Friday after throwing a Molotov cocktail, the army said.

Hundreds participated in his funeral, with some men firing in the air with automatic rifles as the body was taken from the mosque to the cemetery.

"I spent years raising him, and now I am so angry," his mother, Samar Khayatt, told AFP. "He is happy now; he's a martyr and he's next to God, but I am very angry." A military spokeswoman said some 50 Palestinians were throwing stones and fire bombs at Israeli forces at Jalazon, who used riot dispersal methods against them.

A Palestinian security source reported clashes throughout the West Bank as Saturday sunset neared, although the Israeli army and police said there were no major confrontations.

On Saturday morning, Palestinians and Jewish settlers clashed near Kusra in the northern West Bank, trading volleys of stones until the Israeli army declared the area a closed military zone.

In east Jerusalem, around 10 Palestinians were wounded in overnight clashes with Israeli police, Palestinian sources said.

Israeli Prime Minister Benjamin Netanyahu has condemned the attack on the Dawabsha family as "terrorism in every respect" and vowed to spare no effort in bringing the perpetrators to justice.

But Palestinian president Mahmud Abbas said he doubted Israel would provide "true justice" and ordered his foreign minister to file a complaint at the International Criminal Court in The Hague.