DAMASCUS (WASHINGTON POST) - The Syrian war has been a slowly unfolding catastrophe, one that has embroiled nearly the whole world.

Here's a look at how it started, why it became so complicated and what might happen next.

1. How did the war in Syria start?

In March 2011, peaceful protests broke out around the country as part of the Arab Spring uprisings.

In response, some of the protesters teamed up with military defectors to form the Free Syrian Army, a rebel group that wanted to overthrow the government.

By 2012, this armed struggle had devolved into a full-blown civil war. 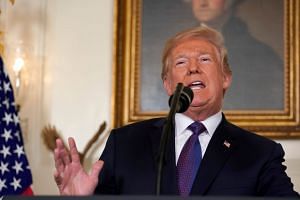 2. What is Russia doing in Syria?

Russia has long supported Mr Assad's government. According to one scholar, Russia helped build the modern Syrian military, and Mr Assad is one of Russian President Vladimir Putin's strongest allies in the Middle East.

Russia has often blocked meaningful international action on Syria by vetoing proposals at the UN Security Council, and Moscow changed the course of the war in Mr Assad's favour with a military intervention in 2015.

3. Why is the United States involved?

The United States has been reluctant to become too entangled in Syria, but it has acted for two main reasons.

First, the Islamic State in Iraq and Syria (ISIS) began developing a foothold in the country in 2013.

The next year, the United States launched air strikes against the militant group. It eventually sent ground troops into the fight, and about 2,000 US forces are now deployed there.

Second, the United States has acted to punish the Assad government for using chemical weapons such as sarin and chlorine gas on Syrian civilians.

4. What were those specific actions?

In 2012, President Barack Obama called the use of chemical weapons a "red line" that would prompt military intervention.

The following year, a sarin gas attack in Eastern Ghouta killed about 1,400 people, according to the US government's assessment.

Mr Obama pushed for a strike but couldn't get congressional approval.

Instead, he came up with a diplomatic solution. The UN Security Council ordered Mr Assad to destroy his chemical weapons stockpile and sign the Chemical Weapons Convention, which prohibits countries from producing, stockpiling or using chemical weapons.

There have been several reports of chemical weapons attacks since then.

One particularly bad strike took place April 4, 2017. Nearly 100 people were killed in the northern town of Khan Sheikhoun in an apparent sarin attack. It garnered worldwide headlines and the attention of President Trump, who expressed horror at the images of "innocent children, innocent babies" poisoned by a nerve agent.

Just a few days after that attack, Mr Trump authorised a cruise missile strike on a Syrian air base.

It was the first direct US strike on the Syrian regime in the war.

5. Who are the key regional players helping Mr Assad?

One of Mr Assad's key allies is Iran. Iran needs Syria to move its weapons and proxy militias across the Middle East.

So when Mr Assad seemed threatened, Iran stepped in to support him. So did Hizbollah, the Lebanese political party and militia that is a close ally of Teheran.

That upset Iran's rivals in the region, like Saudi Arabia and Turkey. So they began sending arms and money to anti-Assad rebels, including extremist militias.

That means that today, there are many wars being fought inside Syria. The Syrian government is still at war with the rebels. Israel is at war with Iranian-backed forces. And the United States is trying to kill off ISIS.

Horrible. Syrian families often don't have basic necessities, like food, shelter and medical care. Children can't go to school. The war is being fought in towns and on the streets.

Since the start of the war, more than 465,000 Syrians have been killed, 1 million more have been injured, and 12 million - more than half the country's population - have been forced to flee their homes.

More than 5.5 million have moved abroad and registered as refugees.