RIYADH (AFP) - Every few metres someone – a newly-wed couple, a group of young girls with balloons – stops Samar Almogren to cheer her on or flash her a thumbs-up.

It’s midnight in Riyadh, and she’s making her way across the city she was born and raised in, finally in the driver’s seat of her own car.

After drinking tea and counting down the minutes, at midnight, Samar – a TV anchor and mother-of-three – went upstairs to kiss her four-year-old son Salloum goodnight. She then put on a flowing white abaya, strode out of her front door, accompanied by her best friend, and walked towards a white GMC parked outside her house in the Narjiss neighbourhood in northern Riyadh.

Across the street, her neighbour had just arrived home with two bags of groceries. He paused, placed his shopping on the hood of his car, and watched her closely.

In her cateye glasses, wedge sandals and nose ring, she did not skip a beat.

She smiled, climbed in, started the ignition and pulled out of her parking spot.

“I have goosebumps,” she says as she turns onto the King Fahd highway, the main road in the Saudi capital.

She drives in silence for a few minutes, glancing up at the moon, then adds: “I never in my life imagined I would be driving here. On this road. Driving.”

The question of whether Saudi Arabian society is “ready” for women to drive has been hotly debated in the kingdom.

In 2013, Sheikh Saleh al-Luhaidan, a notable Saudi cleric, announced driving could damage a woman’s ovaries and push the pelvis up, thus leading to birth defects. 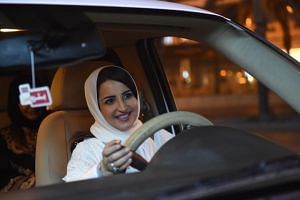 'I'm going to to take my mum wherever she wants', says Saudi woman on first drive at home 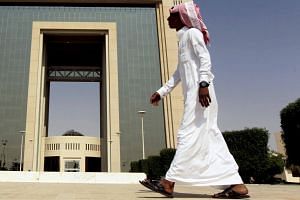 Saudi Arabia to notify women of divorce by text message

Resistance to the end of the driving ban still resonates across some segments of society, with songs titled “You will not drive” and “No woman no drive” popping up on social media in recent weeks.

But as she drives across Riyadh, men and women stopped Samar’s SUV to congratulate her and voice their support.

A group of men in their 20s, waiting for the police assessment of a minor accident, spot Samar driving by. They smile and cheer.

The policeman, too, looks up and smiles.

A man in a suit, smoking on a sidewalk, applauds her loudly.

A young couple walking hand-in-hand – him in a T-shirt and jeans, her in head-to-toe black abaya and niqab – stop to flash her a thumbs-up and a victory sign.

“This is the society they say is not ready for women to drive,” Samar says, visibly moved.

Samar, whose youngest son was born with Down’s syndrome, has already decided where she will drive the next day. “My first trip, tomorrow, is to take Salloumi to my mother’s house,” she says.

“And then to take my mother wherever she wants.”

For many, the end of Saudi Arabia’s driving ban for women is a welcome step, but far from enough in a country that still has a guardianship system in 2018.

Under the system, women need the permission of their closest male relative – husband, father, brother or even son – for most facets of life, including travelling, enrolling in school and in certain cases receiving medical attention.

Samar says she is fully aware that her newfound freedom to drive was not the fruit of activists who have long fought Saudi Arabia’s repressive gender policies – some of whom were arrested just this month.

Decades of campaigning by activists failed to achieve what one stroke of the king’s pen ended in a royal decree signed last year. “This was a political decision,” she says.

But the will for women to drive in Saudi Arabia – like the will to dismantle the guardianship system – goes back nearly two decades.

On November 6, 1990, 47 women drove themselves through the streets of Riyadh in an act of protest against, and in defiance of, the ban, stopping only when they were arrested.

Some lost their jobs. Others lost the support of their families. What was not lost was their cause.

One of the women, Faiza al-Bakr, now works with Samar at the national paper where she runs a twice-weekly column. “It was them,” Samar says of Bakr and the 46 others

The kingdom earlier this month began issuing its first driving licences to women in decades, with some swapping their foreign permits for Saudi ones after undergoing a practical test.

Some three million women in Saudi Arabia could receive licences and actively begin driving by 2020, according to consultancy firm PricewaterhouseCoopers.

A handful of women driving schools have cropped up in cities like Riyadh and Jeddah, training women to drive cars and also Harley Davidson motorbikes – scenes that were unimaginable even a year ago.

Many Saudi women have ebulliently declared plans on social media to drive their mothers for coffee or ice cream as soon as the ban ends on Sunday, a mundane experience elsewhere in the world but a dazzling novelty in the desert kingdom.

The move is expected to boost women’s employment, and according to a Bloomberg estimate, add US$90 billion (S$122 billion) to economic output by 2030.  Many women fear they are still easy prey for conservatives in a nation where male “guardians” – their fathers, husbands or other relatives – can exercise arbitrary authority to make decisions on their behalf.

The government has preemptively addressed concerns of abuse by outlawing sexual harassment, with a prison term of up to five years and a maximum penalty of 300,000 riyals.

Crown Prince Mohammed bin Salman, appointed heir to the most powerful throne in the Middle East a year ago this month, has also lifted a ban on cinemas and mixed-gender concerts, following his public vow to return the kingdom to moderate Islam.

But much of the initial optimism over his reforms appears to have been dented by a sweeping crackdown on women activists who long opposed the driving ban.

Authorities have said that nine of 17 arrested people remain in prison, accused of undermining the kingdom’s security and aiding enemies of the state.

The detainees include three generations of activists, among them 28-year-old Loujain al-Hathloul, also held in 2014 for more than 70 days for attempting to drive from neighbouring United Arab Emirates to Saudi Arabia, and Aziza al-Yousef, a retired professor at Riyadh’s King Saud University.

State-backed newspapers have published front-page pictures of some of the activists, the word “traitor” stamped across them in red.

Human Rights Watch this week said the kingdom has arrested two more women activists – Nouf Abdelaziz and Mayaa al-Zahrani, in what it denounced as an “unrelenting crackdown”.

Even some of the prince’s ardent supporters have labelled the crackdown a “mistake”.  It has been seen as a calculated move both to placate clerics incensed by his modernisation drive and also to send a clear signal to activists that he alone is the arbiter of change.

“If the authorities give credit to the women who championed lifting the driving ban, it means conceding that reforms can be won through activism, and then the Saudis may demand more,” Human Rights Watch said this week.