RIYADH (BLOOMBERG) - Saudi Crown Prince Mohammed bin Salman has been spending remarkably more time with his father in public since the international condemnation of last month's murder of a United States-based newspaper columnist.

They shook hands with Saudis on a tour of conservative heartlands and last week inaugurated a giant industrial park together.

US President Donald Trump, meanwhile, did his bit to shield the prince. He has repeatedly avoided laying blame for the Oct 2 killing of Mr Jamal Khashoggi and lauded Saudi Arabia for a sharp drop in oil prices.

With such powerful people in his corner, the conventional wisdom may be that Prince Mohammed will survive the fallout from the brutal dispatching of a critic.

Indeed, he headed next door to the United Arab Emirates last Thursday (Nov 22) for talks with a key ally, and looks increasingly likely to attend the Group of 20 summit in Argentina at the end of the month. But there are still many unknowns, and the fate of the young leader is the talk of the town in Riyadh.

In conversations among diplomats, Saudis and foreigners working in the kingdom for years, there are two questions everyone keeps asking: Can Prince Mohammed remain the chosen successor to King Salman and - if not - what would happen to the economic and social reforms he has been driving?

It is difficult to determine how senior royal family members, tribal leaders and the security apparatus view the prince after a series of bungles abroad and repression of critics at home.

There could be repercussions from his marginalisation of rival princes as he consolidated his grip on power. Sentencing to death five of the 11 people charged with Mr Khashoggi's murder may undermine the trust the Saudi security services, a key bulwark against opposition, have in the prince.

Turkey may have evidence that directly implicates the prince in Mr Khashoggi's death at the Saudi consulate in Istanbul, a connection that would inflame his opponents in the United States and Europe. 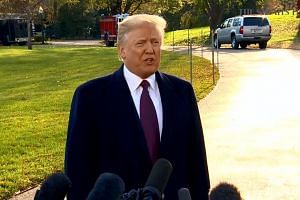 Trump says does not want to hear 'suffering' Khashoggi tape

The murder, irrespective of whether Prince Mohammed ordered it or not, has been a game-changer, according to Dr Kamran Bokhari, a Washington-based national security and foreign policy specialist with the University of Ottawa's Professional Development Institute.

"It basically turned his life upside down," said Dr Bokhari. "He's gone from having the promise of a long career to not knowing what his future is, to uncertainty whether he will be able to rule. It's a stain that will remain with him and constrain him from doing much."

The crown prince marketed himself to the West as the brash young royal who was going to modernise the kingdom and confront Islamic extremism, the man known as "MBS" who embodied the new Saudi Arabia.

His plan to sell a stake in the Saudi Arabian Oil made him the darling of international bankers. Amid a cohort of ageing Saudi royals, the crown prince was set to lead the world's largest oil exporter for decades. Now, his future is much less secure.

Signs of how little room he has to maneuver are already emerging. After Mr Trump announced the US would not let Mr Khashoggi's murder jeopardise relations with the kingdom last Tuesday, oil prices swiftly headed towards US$50 a barrel. The decline might be good for the prince's rehabilitation, but it will further strain the slow-growing Saudi economy.

The US president has been clear that his support for the prince - against powerful voices from Congress and a CIA report that blamed Mr Khashoggi's murder on Prince Mohammed - comes with a price.

In a statement headlined "America First!", Mr Trump said last Tuesday that the kingdom's strategic importance outweighs the "horrible crime". And he reminded Saudi Arabia that it has agreed "to spend and invest US$450 billion (S$620 billion) in the United States. This is a record amount of money".

At home, King Salman embarked this month on the first comprehensive tour of the kingdom since he came to power in 2015. The subtext was to try to repair some of the damage in relations with the religious establishment, tribes and regional princes as a result of his son's policies.

The king, accompanied by Prince Mohammed, started out in Qassim, the most conservative region, promising millions in development projects at every stop. The prince's pet project, a futuristic new city in the desert called Neom to rival Dubai, no longer seems to be the priority.

Saudi kings have used money to bolster support around the country during times of uncertainty. As the Arab Spring was spreading across the Middle East, then King Abdullah announced billions in spending to ward off unrest.

King Salman may be betting that pledges of loyalty to him by senior Saudis may protect Prince Mohammed long enough for this to blow over. During his annual speech at the Shoura Council, the monarch did not mention the murder of Mr Khashoggi as his son sat stern-faced next to Saudi Arabia's grand mufti, the top religious official.

The king "knows exactly how to set up the home front to ensure it doesn't turn against MBS", said Mr Ayham Kamel, head of Middle East and North Africa research at Eurasia Group. "The visits to the different provinces, who the king is meeting there, the money, all of that is part of a comprehensive package to ensure that the leadership is protected as it stands today. They are doing this to defend the current line of succession."

When asked by CNBC what his message would be to those who say a regime change was needed for Saudi Arabia, Foreign Minister Adel al-Jubeir called the notion ridiculous.

In an interview on Saturday, a long-serving former head of Saudi intelligence cast doubt over any CIA report that incriminates Prince Mohammed in the murder of Mr Khashoggi. "The CIA has been proved wrong before," Prince Turki Al-Faisal said in Abu Dhabi, citing the agency's assertions over chemical weapons before the invasion of Iraq in 2003.

Such allegiance, however, may not be enough. The 33-year-old crown prince has some powerful critics and enemies in the US, including senior lawmakers, and in Europe, where he was viewed with increasing hostility for his war in Yemen and his human rights record.

Domestically, there is chatter about royal grumblings and speculation that the king's full brother, Prince Ahmed, who returned from London a few weeks ago, could even replace him.

Other senior royals were shunned as Prince Mohammed took over the army, state security and most of the country's economic institutions. He threw out the system of consensus that had been in place for decades, a move that has likely caused resentment among senior princes.

"He must be constantly worried about his future," said Dr Bokhari. "Even though he has jailed potential opponents, bribed others, and coerced family members, how can he be confident that when he turns around there are not others who are plotting against him behind the scenes?"

An indication of the prince's confidence in his own fate will be whether he attends the G-20 summit starting on Nov 30. Rulers who do not feel secure at home generally avoid travelling abroad. Saudi Al-Arabiya television reported that the prince was going to the summit.