BANGKOK (REUTERS) - An 18-year-old Saudi woman who fled her family saying she feared for her life has been granted asylum in Canada, Canadian Prime Minister Justin Trudeau said on Friday (Jan 11), as Thai officials confirmed the teen was en route to Toronto.

Trudeau told reporters that United Nations High Commissioner for Refugees (UNHCR) had asked Canada to take in Rahaf Mohammed al-Qunun, who grabbed international attention this week after she barricaded herself in a Bangkok airport hotel room to resist being sent home to her family, which denies any abuse.

"Canada is a country that understands how important it is to stand up for human rights, to stand up for women's rights around the world, and I can confirm that we have accepted the UN's request," he said.

Qunun will board a connecting flight to Toronto from Seoul's Incheon airport.

She is expected to arrive in Canada on Saturday morning.

"It was her wish to go to Canada," Thailand's immigration chief Surachate Hakparn told reporters.

"She still refuses to meet with her father and brother, and they are going to be traveling back tonight as well... They are disappointed." 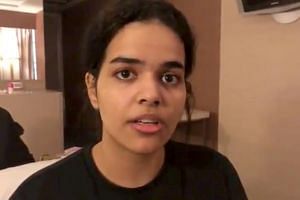 Qunun has accused her family of abuse, and has refused to meet her father and brother who arrived in Bangkok to try take her back to Saudi Arabia.

Qunun arrived in Bangkok on Saturday and was initially denied entry, but she soon started posting messages on Twitter from the transit area of Bangkok's Suvarnabhumi airport saying she had "escaped Kuwait" and her life would be in danger if forced to return to Saudi Arabia.

Within hours, a campaign sprang up dubbed #SaveRahaf, spread on Twitter by a loose network of activists.

Following a tense 48-hour stand-off at Bangkok airport, some of it barricaded in a transit lounge hotel room, she was allowed to enter the country and has been processed as a refugee by the UNHCR.

Her case has drawn global attention to Saudi Arabia's strict social rules, including a requirement that women have the permission of a male "guardian" to travel, which rights groups say can trap women and girls as prisoners of abusive families.

Qunun's flight has emerged at a time when Riyadh is facing unusually intense scrutiny from its Western allies over the killing of journalist Jamal Khashoggi at the Saudi consulate in Instanbul in October and over the humanitarian consequences of its war in Yemen.

Around midday on Friday, Qunun posted on her Twitter account that she had "bad and good news!"

A Twitter user known as Nourah, whom Qunun has referred to as a friend, tweeted that Qunun "received death threats and for this reason she closed her Twitter account".