JEDDAH (AFP) - In a sparse, wood-floored studio, Saudi women squat, lunge and do headstands. Even a year ago, teaching these yoga postures could have rendered them outlaws in the conservative Islamic kingdom.

Widely perceived as a Hindu spiritual practice, yoga was not officially permitted for decades in Saudi Arabia, the cradle of Islam where all non-Muslim worship is banned.

But with Crown Prince Mohammed bin Salman vowing an "open, moderate Islam", the kingdom last November recognised yoga as a sport amid a new liberalisation drive that has sidelined religious hardliners.

Spearheading efforts to normalise yoga in the kingdom is Ms Nouf Marwaai, a Saudi woman who has battled insults and threats from extremists to challenge the notion that yoga is incompatible with Islam.

"I have been harassed, (and) sent a lot of hate messages," said the 38-year-old head of the Arab Yoga Foundation, which has trained hundreds of yoga instructors in the kingdom.

"Five years ago, this (teaching yoga) would have been impossible," added Ms Marwaai, as she began training a cluster of women students at a private studio in the Red Sea city of Jeddah.

Hanging up their body-shrouding abayas and headscarves, the women stretched in unison in an arching warrior pose known as "virabhadrasana".

In a country where women have long been denied the right to exercise publicly, the students - some of whom regularly attend yoga retreats in India - said the exercise had transformed their lives.

"It just opened me up like a water balloon," said Ms Yasmin Machri, 32. "After my first class... I started breaking down and crying."

In just a few months since yoga's recognition, a new industry of yoga studios and instructors has sprouted in various Saudi cities. That includes Mecca and Medina, Islam's holiest cities, Ms Marwaai said. 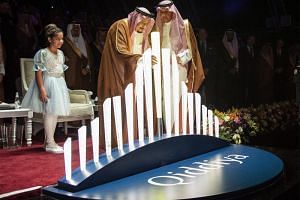 Prince Mohammed, the de facto ruler, has sought to project a moderate image of the kingdom, long associated with a fundamentalist strain of Wahhabi Islam, with a new push for inter-religious exchange.

Saudi Arabia in recent months has hosted officials linked to the Vatican, and the prince also met a group of Roman Catholic and Jewish leaders in New York earlier this year, in a rare interfaith gesture.

"The prince's outreach to other religions is apparent in the interfaith gatherings and the new enthusiasm for Saudi Arabia's pre-Islamic heritage," said Ms Kristin Diwan, of the Arab Gulf States Institute in Washington.

For decades, Saudi rulers derived much of their legitimacy from their alliance with a clerical establishment that pushed a puritanical vision of Islam.

But the prince appears to have upturned the system, seeking instead to tap support from the kingdom's swelling youth base through a surge of nationalism and a much-hyped modernisation drive.

Saudi columnists have openly called for abolishing the once-feared religious police as the kingdom introduces entertainment, including mixed-gender concerts, and reopens cinemas after a decades-long ban.

Prominent hardline Salafist clerics with millions of followers on social media have been jailed, with some on death row, as the crown prince clamps down on dissent.

Yoga is still regarded as a deviant practice in conservative circles, sometimes associated with witchcraft, and Ms Marwaai's students say they often confront accusations of betraying their religion.

"I receive messages through social media asking, 'Are you a Hindu? Did you turn into a Hindu?'" said recruitment specialist Budur al-Hamoud. "Yoga has nothing to do with religion. It's a sport... It does not interfere with my faith."

Yoga is seen at odds with several other faiths, but the recognition of the practice in Saudi Arabia - the epicentre of the Islamic world - appears to have given a new impetus to Muslim yoga practitioners around the world.

Ms Marwaai is taking on conservatives not just in the kingdom but also in India, the birthplace of yoga, where clerics last year slapped a fatwa, or religious edict, against a female Muslim yoga teacher just days before the kingdom recognised the sport.

In a shrill Indian television debate, Ms Marwaai - a lupus survivor and recently awarded the Padma Shri, one of India's highest civilian honours - calmly sought to reason with Muslim clerics who hurled insults at her.

The clerics were particularly opposed to "Surya Namaskar", a yoga sequence designed to greet Surya, the Hindu sun god, and the chanting of Hindu mantras.

"It is not the worshipping of the sun and the moon," Ms Marwaai responded as tempers frayed, denying they engaged in chanting.

Ms Marwaai retorted that the slow meditation does not increase the metabolic rate.