BAGHDAD REUTERS) - Supporters of militias protesting against deadly US air strikes on Iraq hurled stones and torched a security post at the US Embassy in Baghdad on Tuesday (Dec 31) in an unprecedented attack on an American diplomatic mission in the country.

Embassy guards responded with stun grenades and tear gas after militiamen stormed and burned the security post at the entrance but did not breach the main compound.

The incident marked a sharp escalation of the proxy conflict between Washington and Teheran – both influential players in Iraq - while mass protests are challenging Iraq’s own political system nearly 17 years after the US invasion that toppled Saddam Hussein.

It comes after months of security incidents in the region for which both sides have traded blame.

US President Donald Trump accused Iran of orchestrating the violence and said it would be held responsible. Iran rejected the accusation.

More US troops were being sent to the embassy, US officials said.

The US Embassy in Baghdad has been hit by sporadic but non-lethal rocket fire in recent months, and was regularly shelled following the US-led invasion of 2003, but has not been physically attacked by demonstrators in this way before.

The protests were led by Iranian-backed militias and lasted several hours, but the US State Department said later that personnel were secure and the facility had not been breached.

A State Department spokesperson said reports from Iraqi officials that the ambassador had been evacuated were false. The envoy, Matt Tueller, had been on previously scheduled personal travel and was returning to the embassy, the official said.

There were no plans for an evacuation.

US air strikes on Sunday on Iranian-backed militia bases killed at least 25 fighters and wounded 55.

Those raids, on the Kataib Hezbollah militia, were in response to the killing of a US civilian contractor in a rocket attack on an Iraqi military base.

“Iran killed an American contractor, wounding many. We strongly responded, and always will,” Trump said in a tweet.

“Now Iran is orchestrating an attack on the US Embassy in Iraq. They will be held fully responsible.”

“America has the surprising audacity of attributing to Iran the protests of the Iraqi people against (Washington’s) savage killing of at least 25 Iraqis,” Iranian foreign ministry spokesman Abbas Mousavi said.

The protesters, who were joined briefly by Iranian-backed Shi’ite Muslim militia leaders, threw stones at the gate while others chanted, “No, no, America! No, no, Trump!” Iraqi special forces were deployed around the main gate to prevent protesters entering. 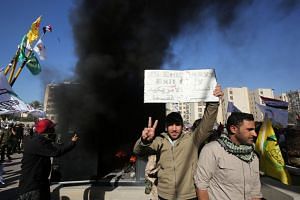 US has no plan to evacuate embassy in Baghdad, more forces being sent to compound

Iran blasts 'audacity' of US to blame it for Iraq violence

The Popular Mobilisation Forces, an umbrella grouping of the militias which have been officially integrated into Iraq’s armed forces, said 62 militiamen and civilians were wounded by the tear gas and stun grenades fired to disperse the crowd.

The Washington Post reported that US diplomats and staffers were huddled in a fortified safe room in the embassy, according to two reached by a messaging app.

A few hours into the protest, tear gas was fired in an attempt to disperse the crowd and some of the militias encouraged protesters through loudspeakers to leave.

“We have delivered our message, please leave the area to avoid bloodshed,” one announcement said.

A Reuters witness saw blood on the face of one wounded militiamen and on the stomach of the other as their colleagues carried them away.

‘CLOSED IN THE NAME OF THE PEOPLE’

Iraqis have been taking to the streets in their thousands almost daily to condemn, among other things, militias such as Kataib Hezbollah and their Iranian patrons that support Iraqi Prime Minister Adel Abdul Mahdi’s government.

But on Tuesday it was the militias that protested, spraying“Closed in the name of the people” on the gates of the US Embassy and smashing surveillance cameras around the building.

Qais al-Khazali, leader of the Asaib Ahl al-Haq militia, and many other senior leaders were among the protesters. The US recently imposed sanctions on him for his group’s alleged involvement in attacks on anti-government protesters.

“Americans are unwanted in Iraq. They are a source of evil and we want them to leave,” said Khazali, one of Iran’s most important allies in Iraq.

Iranian-backed militias blamed the US and Israel for a series of attacks on their bases during the summer, and Washington has blamed Iran and its proxies for attacks on oil installations in the Gulf and rocket attacks on bases hosting US forces in Iraq.

Those incidents have brought fears of a region-wide US-Iran confrontation.

Kataib Hezbollah is one of the smallest but most potent of the Iranian-backed militias. Its flags were hung on the fence surrounding the embassy.

US Secretary of State Mike Pompeo spoke to Abdul Mahdi and President Barham Salih by telephone from Washington and said they had guaranteed the safety of US personnel and property.

“The Secretary made clear the United States will protect and defend its people, who are there to support a sovereign and independent Iraq,” a State Department spokeswoman said.

More than 5,000 US troops are stationed in Iraq supporting local forces.