BAGHDAD (AFP) - The Iraqi army retook the last town in the country still held by the Islamic State in Iraq and Syria (ISIS) group on Friday (Nov 17) as the Islamists' self-proclaimed "caliphate" faced collapse on both sides of the border with Syria.

The lightning recapture of the small Euphrates valley town of Rawa in an offensive launched at dawn came as the Islamists were also under attack for a second day in the last town they still hold in Syria, Albu Kamal, just over the border.

ISIS has lost 95 per cent of the cross-border "caliphate" it declared in Iraq and Syria in 2014, the US-led coalition fighting it said on Wednesday.

Its losses include all of its major bastions, virtually confining it to pockets of countryside.

Government troops and paramilitary units "liberated the whole of Rawa and raised the Iraqi flag on all of its official buildings", General Abdelamir Yarallah of Iraq's Joint Operations Command (JOC) said in a statement.

An army general at the front had predicted that the battle would be swift as "the majority of IS fighters who were in the town have fled towards the Syrian border". IS is an alternative acronym for ISIS.

The JOC said appeals had been made for several days to the town's Sunni Arab residents to listen to radio broadcasts for instructions on what to do when the army entered.

Rawa was bypassed in an offensive by the Iraqi army that resulted in the recapture of the strategically important border town of Al-Qaim earlier this month.

The stretch of Euphrates valley abutting the border with Syria has long been a bastion of Sunni Arab insurgency, first against US-led troops after the invasion of 2003 and then against the Shi'ite-led government in Baghdad. 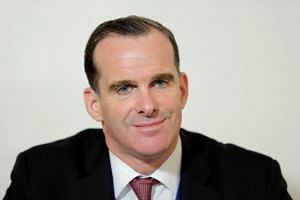 ISIS has lost 95 per cent of its 'caliphate', says US-led coalition

The porous frontier became a magnet for foreign fighters entering Iraq from Syria, which Baghdad accused of turning a blind eye, and a key smuggling route for arms and illicit goods.

US-led troops carried out repeated operations with code names like Matador and Steel Curtain in 2005 to flush out Al-Qaeda terrorists.

The region swiftly fell to ISIS when its fighters swept through the Sunni Arab heartland north and west of Baghdad in 2014 before proclaiming its "caliphate".

The extremists once controlled a territory the size of Britain, but they have successively lost all their key strongholds, including Raqqa in Syria and Mosul in Iraq.

Over the border in Syria, ISIS still holds around 25 per cent of the countryside of Deir Ezzor province, but are under attack not only by government forces, but also by US-backed Kurdish-led fighters.

In the border town of Albu Kamal, the Syrian army was battling ISIS fighters who mounted a surprise counterattack last week, pushing out government forces who had retaken it last month.

The Syrian Observatory for Human Rights, a Britain-based monitor of the war, said the new army offensive had successfully penetrated the town, with troops backed by Russian air strikes advancing from the west, east and south.

"More than 7.5 million people have now been liberated" from ISIS, Washington's envoy to the coalition, Mr Brett McGurk, said late on Wednesday, adding that the group's finances are now "at their lowest levels to date".

With the Islamists' dreams of statehood lying in tatters following the battlefield defeats, Western attention is increasingly pivoting to trying to block foreign fighters from returning home to carry out attacks.

Mr McGurk insisted that flows of foreign ISIS fighters into Syria have "nearly stopped", and that militants are increasingly being picked up as they cross borders.

"We are enhancing cooperation and border security, aviation security, law enforcement, financial sanctions, counter-messaging, and intelligence sharing to prevent ISIS from carrying out attacks in our homelands," he said.

Analysts have warned that in some areas recaptured from ISIS, government control remains weak and the terrorists retain the capability to wage a low-level insurgency.

"We still have places by the Baghdad belt, areas including Ramadi and Fallujah... that are not well controlled at all," Mr Michael Knights of the Washington Institute for Near East Policy said earlier this month.

"They (ISIS) are back where they were in 2013... They will restart insurgency all over again."