DUBAI (REUTERS) - Two oil tankers were attacked on Thursday (June 13) and left adrift in the Gulf of Oman, driving up oil prices and stoking fears of a new confrontation between Iran and the United States, which blamed Teheran for the incident.

“It is the assessment of the United States government that the Islamic Republic of Iran is responsible for the attacks that occurred in the Gulf of Oman today,” US Secretary of State Mike Pompeo told reporters in a brief appearance without providing hard evidence to back up the stance.

“This assessment is based on intelligence, the weapons used, the level of expertise needed to execute the operation, recent similar Iranian attacks on shipping, and the fact that no proxy group operating in the area has the resources and proficiency to act with such a high degree of sophistication,” he said.

Washington accused Teheran of being behind a similar attack on May 12 on four tankers in the same area, a vital shipping route through which much of the world’s oil passes.

Tensions between Iran and the US, along with its allies including Saudi Arabia, have risen since President Donald Trump pulled out of a deal last year between Iran and global powers that aimed to curb Teheran’s nuclear ambitions.

Iran has repeatedly warned that it would block the Strait of Hormuz, near where the attacks happened, if it cannot sell its oil due to US sanctions.

No one has claimed Thursday’s attacks and no one has specifically blamed them on any party. 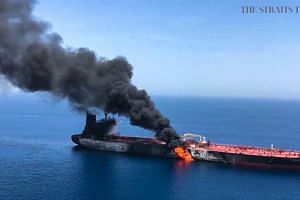 Teheran has denied responsibility for the May 12 attacks.

The Saudi-led military coalition, which is battling the Iran-aligned Houthis in Yemen, described Thursday’s events as a “major escalation”.

Russia, one of Iran’s main allies, was quick to urge caution, saying no one should rush to conclusions about the incident or use it to put pressure on Teheran.

United Nations Secretary-General Antonio Guterres told a meeting of the Security Council on cooperation between the UN and the League of Arab States: “Facts must be established and responsibilities clarified.”

He warned that the world cannot afford “a major confrontation in the Gulf region”.

Crude prices climbed as much as 4 per cent after the attacks near the entrance to the Strait of Hormuz, a crucial shipping artery for Saudi Arabia, the world’s biggest oil exporter, and other Gulf energy producers.

“We need to remember that some 30 per cent of the world’s (seaborne) crude oil passes through the strait. If the waters are becoming unsafe, the supply to the entire Western world could be at risk,” said Mr Paolo d’Amico, chairman of Intertanko tanker association.

The crew of the Norwegian-owned Front Altair abandoned ship in waters between Gulf Arab states and Iran after a blast that a source said might have been from a magnetic mine. The ship was ablaze, sending a huge plume of smoke into the air.

The crew were picked up by a passing ship and handed to an Iranian rescue boat.

The second ship, a Japanese-owned tanker, was hit by a suspected torpedo, the firm that chartered the ship said. Its crew were also picked up safely. However, a person with knowledge of the matter said the attacks did not use torpedoes.

The Bahrain-based US Navy Fifth Fleet said it had assisted the two tankers after receiving distress calls.

Iran has not openly acted on its threat to close the Strait of Hormuz even though US sanctions have seen its oil exports drop from 2.5 million barrels per day (bpd) in April last year to around 400,000 bpd in May.

Both sides have said they want to avoid war. 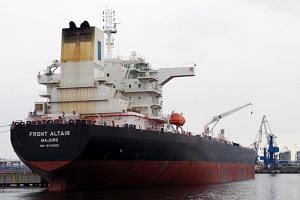 Mr Bob McNally, president of the US consultancy Rapidan Energy Group, said “we see this as Iran trying to get negotiating leverage it doesn’t have”, and described the attacks as “upping the ante but not going all in”.

“I don’t think it tips us over into direct military confrontation. It is still deniable and denied. This is still going to be like the attack last month – everyone is denying it. It’s a blunt message.”

Japanese Prime Minister Shinzo Abe was visiting Teheran when Thursday’s attacks occurred, carrying a message for Iran from Mr Trump, who has demanded that the Islamic Republic curb its military programmes and its influence in the Middle East.

Mr Abe, whose country was a big importer of Iranian oil until Washington ratcheted up sanctions, urged all sides not to let tensions in the area escalate.

Iran said it would not respond to Mr Trump’s overture, the substance of which was not made public.

Britain said it was “deeply concerned” about the attacks.

Germany, which like Britain remains a signatory to the nuclear pact with Iran, said the “situation is dangerous” and all sides needed to avoid an escalation.

The Arab League said some parties were “trying to instigate fires in the region”, without naming a particular party.

Oman and the United Arab Emirates, which have coastlines on the Gulf of Oman, did not immediately issue any public comment.

Saudi Arabia and the UAE, both majority Sunni Muslim nations that have a long-running rivalry with predominantly Shi’ite Iran, have previously said attacks on oil assets in the Gulf pose a risk to global oil supplies and regional security.

Bernhard Schulte Shipmanagement said the Japanese tanker Kokuka Courageous was damaged in a “suspected attack” that breached the hull above the water line while transporting methanol from Saudi Arabia to Singapore.

Japan’s Kokuka Sangyo, owner of the Kokuka Courageous, said the ship was hit twice over a three-hour period.

A shipping broker said the vessel might have been struck by a magnetic mine.

“Kokuka Courageous is adrift without any crew on board,” the source said.

The crew of about 21 or 22 people was picked up by the Coastal Ace vessel, Mr Denis Bross of Acta Marine in the Netherlands told Reuters. He said they were handed to a US Navy vessel.

Taiwan’s state oil refiner CPC said the Front Altair, owned by Norway’s Frontline, was “suspected of being hit by a torpedo” around 4am GMT carrying a Taiwan-bound cargo of 75,000 tonnes of petrochemical feedstock naphtha, which Refinitiv Eikon data showed had been picked up from Ruwais in the UAE.

Frontline said its vessel was on fire but afloat, denying a report by the Iranian news agency IRNA that the vessel had sunk.

Front Altair’s 23-member crew abandoned ship after the blast and were picked up by the nearby Hyundai Dubai vessel. The crew was then passed to an Iranian rescue boat, Hyundai Merchant Marine said in a statement.

Iran’s IRNA reported that Iranian search and rescue teams picked up 44 sailors from the two damaged tankers and took them to the Iranian port of Jask.

The numbers in the Iranian media report could not be independently confirmed.

Iran’s state television showed what it said was a video of rescued crew members in Jask, showing them sitting on sofa, chatting and watching TV. There was one woman among them.

Thursday’s attacks came a day after Yemen’s Iran-aligned Houthis fired a missile on an airport in Saudi Arabia, injuring 26 people.