DAMASCUS (AFP) - US President Barack Obama said he is "not optimistic" about Syria's future, as the UN warned time is running out to avoid a humanitarian catastrophe in Aleppo, which has been pounded by air strikes for nearly a week.

Mr Obama warned that Syria's second city was likely to fall, and that Russian and Iranian backing for Syrian leader Bashar al-Assad had made the situation untenable for the opposition.

"I am not optimistic about the short-term prospects in Syria," he said on Sunday at a summit of Asia-Pacific leaders in Lima.

"Once Russia and Iran made a decision to back Assad in a brutal air campaign... it was very hard to see a way in which even a trained and committed moderate opposition could hold its ground for long periods of time." 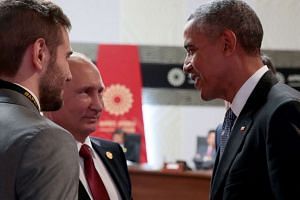 All hospitals in eastern Aleppo out of action after bombardments - officials

But in Damascus, UN envoy Staffan de Mistura was rebuffed on a truce proposal that would allow the opposition to administer the city's rebel-held east.

"We are running out of time, we are running against time," Mr De Mistura said after meeting Foreign Minister Walid Muallem.

Mr Muallem said he had rejected the proposal, under which Islamist forces would leave and the government would recognise the opposition administration in the east which has been bombarded by air strikes, barrel bombs and artillery.

"How is it possible that the UN wants to reward terrorists?" he asked.

Aid agencies fear that instead of a humanitarian or a political initiative, there will be "an acceleration of military activities" in eastern Aleppo and elsewhere, Mr De Mistura told journalists.

"By Christmas... due to military intensification, you will have the virtual collapse of what is left in eastern Aleppo; you may have 200,000 people moving towards Turkey - that would be a humanitarian catastrophe."

On Sunday, rebels retaliated with a barrage of rockets into government-held western Aleppo, state media said, hitting a primary school and killing at least eight children.

Syrian television showed bloodied and weeping children being treated in hospital, and an Agence France-Presse journalist saw pupils being rushed from the school after the attack.

But regime forces broke through into the city's north-eastern area of Massaken Hanano, sparking fierce clashes, the Syrian Observatory for Human Rights said.

It also reported heavy fighting as the army sought to gain ground in two eastern neighbourhoods.

The Britain-based monitoring group said at least 19 civilians, including five children, were killed in the east on Sunday. That brought to 115 the number of civilians killed since the bombardment resumed.

"The Secretary-General reminds all parties to the conflict that targeting civilians and civilian infrastructure is a war crime," his office said in a statement.

"Those responsible for these and other atrocities in Syria, whoever and wherever they are, must one day be brought to account."

On Monday (Nov 21), the UN Security Council was scheduled to meet in New York to discuss humanitarian efforts in Syria. Last week, it decided to extend for another year a probe into chemical attacks in the country and who is responsible.

The regime offensive on eastern Aleppo has forced hospitals and schools to close and destroyed facilities for hard-pressed rescue workers.

Shelling on Friday (Nov 18) destroyed one of the last hospitals there and staff were also forced to evacuate the area's only children's hospital because of repeated attacks.

Russia, which intervened militarily last year, says it is not involved in the current assault on Aleppo, and is instead concentrating its firepower on opposition and Islamist forces in neighbouring Idlib province.

But Damascus and its allies have made clear they want rebels expelled from eastern Aleppo, which fell from regime control in mid-2012.

More than 250,000 people remain in eastern Aleppo, which has been sealed off since government forces surrounded it in mid-July. No aid has entered the east since then and the siege has created food and fuel shortages.

More than 300,000 people have been killed in Syria since the conflict began with anti-government protests in March 2011.