JERUSALEM (REUTERS) - Israeli police revealed on Tuesday (Feb 20) they had arrested the controlling shareholder and CEO of the country's biggest telecoms company, as well as two former officials with close ties to Prime Minister Benjamin Netanyahu, in a corruption case.

The arrests in the investigation dubbed "Case 4000" came just days after police recommended Mr Netanyahu himself be indicted for bribery and fraud in other cases, known as "1000" and "2000".

Mr Shaul Elovitch, a family friend of Mr Netanyahu's who controls telecoms firm Bezeq through his Eurocom holding company, was arrested along with his wife, his son and Bezeq's CEO Stella Handler.

All the arrests took place on Sunday, but the identities of the suspects were withheld for two days under standard Israeli criminal procedure.

Mr Elovitch, his wife and son deny any wrongdoing, a Eurocom spokesman said. A lawyer for Ms Handler said she is cooperating fully with the investigation and denies the allegations. Bezeq officials declined to comment.

Mr Netanyahu, now in his fourth term, has denied any wrongdoing in the various investigations which threaten his long dominance of Israeli politics. He has dismissed any suggestion of illegality in his dealings with Mr Elovitch or Bezeq.

In its new probe, police suspect that Bezeq received regulatory benefits in return for enabling favourable media coverage of Mr Netanyahu on Walla, a news website that is also controlled by Eurocom.

"This is a new investigation in the Bezeq case as a result of evidence raised in the ISA investigation," a joint statement from the police and ISA said.

"During the investigation suspicions mounted of offences of integrity, money laundering laws and the securities laws which were carried out over time." 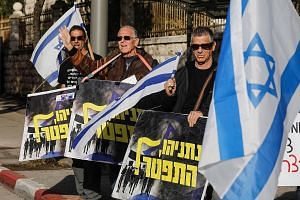 In a Facebook post on Monday, Mr Netanyahu - who has described the investigations against him as a "witch hunt" - said: "There has never been any payback or illegal act in interaction with Elovitch."

A statement issued on Sunday by a personal spokesman to Mr Netanyahu said all decisions related to Bezeq "were made according to recommendations of expert committees and expert officials".

The ISA said in November it had enough evidence to support criminal charges against senior Bezeq officials, leaving it to Tel Aviv prosecutors to decide whether to indict.