BAGHDAD (AFP) - Mosul was the largest city in the "caliphate" proclaimed by the Islamic State in Iraq and Syria (ISIS) and its loss is a huge blow to the extremists' statehood experiment - but not a fatal one.

The northern Iraqi city was where ISIS leader Abu Bakr al-Baghdadi made his only known public appearance in July 2014, announcing himself to the world as "caliph" during a Friday sermon at a mosque in the Old City.

It took tens of thousands of Iraqi forces backed by Western warplanes and special forces nearly nine months to defeat the militants, who leave behind them a heavily damaged city and exhausted security forces.

With Mosul, a city that had a population of around two million three years ago, the "caliphate" loses one of the main hubs of its administration and ISIS one of the most potent symbols of its might.

"It is a major blow to ISIS's prestige," said David Witty, an analyst and retired US special forces colonel. 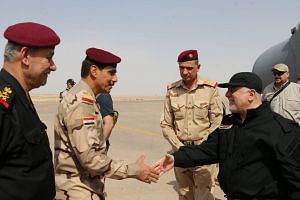 The recapture of Mosul, hailed as a decisive step towards ending this unprecedented episode in the history of modern Muslim extremism, is the latest in a long string of setbacks for ISIS.

At its peak, ISIS controlled a territory roughly the size of South Korea or Jordan and with a population of more than 10 million. It has now lost more than half of the land and three quarters of the population.

And a major offensive on its other de facto capital, the Syrian city of Raqa, is gathering momentum.

The group - whose motto was "remain and expand" - has not conquered new areas around the core of its "caliphate" since 2015, has lost thousands of fighters and is less attractive to foreign militants than it once was.

Yet analysts warn it is too early to declare final victory.

"We should not view the recapture of Mosul as the death knell for IS," said Patrick Martin, Iraq analyst at the Institute for the Study of War, adding the group "still holds significant urban terrain," notably in Syria.

Even in Iraq, where the jihadists lost more ground and only retain seven percent of the territory they once had, declaring the caliphate dead "implies that IS can no longer control terrain and govern," he said.

Yet "if security forces do not take steps to ensure that gains against ISIS are sustained for the long-term, then ISIS could theoretically resurge and recapture urban terrain," Martin said.

As it attempts to save the remnants of the caliphate, the group is likely to intensify a transformation it has already begun by focusing more of its resources on guerrilla attacks and bombings.

"In the near-term in Iraq, ISIS will switch to terrorism and insurgency instead of trying to openly control major areas," Witty said.

The deadliest ever bomb attack in Baghdad, in which more than 320 people were killed last year, came after the extremists lost their emblematic bastion of Fallujah.

The group also staged a major commando attack on the Kurdish-controlled city of Kirkuk days after the launch of the assault on Mosul, which was Iraq's biggest military operation in years.

With its dreams of statehood on hold, ISIS is expected to revert to those types of attack and do everything it can to deny the Iraqi government any claim it has been eliminated.

"It is very easy to see this coming, and Iraq will likely be plagued by insecurity for years to come," Witty said.

The reach of ISIS ideology remains one of the greatest threats in the world after three years that saw foreign affiliates mushroom far beyond the core of the "caliphate" and thousands of foreign fighters join the battlefield, with some returning home.