JERUSALEM (AFP) - Prime Minister Benjamin Netanyahu has hailed US President Donald Trump's peace proposal as a victory for Israel earned on his watch, but whether it boosts his re-election chances remains to be seen, experts say.

The March 2 vote is Israel's third in less than a year, with polls suggesting the prime minister's rightwing Likud is again neck-and-neck with the centrist Blue and White party led by ex-military chief Benny Gantz.

A glowing Netanyahu, who has highlighted his personal bond with Trump, stood alongside the real estate tycoon at the White House when the peace plan was announced on Tuesday.

Hours later the Israeli premier released a video on social media, thanking his supporters for the "honour" of representing them at an event "that significantly strengthens Israel".

But ahead of the unveiling, Israeli Attorney-General Avichai Mandelblit had formally filed graft charges against Netanyahu at a Jerusalem court, after the premier withdrew his request seeking parliamentary immunity.

"The (Trump plan) is changing the agenda from Netanyahu's personal matters to a diplomatic agenda," said Gideon Rahat, a political scientist at the Hebrew University of Jerusalem and a researcher at the Israel Democracy Institute (IDI).

The news from Washington dominated headlines in Israeli papers on Wednesday (Jan 29), with the graft case generally given second billing.

BOOST IN THE POLLS?

Analysts said the details of Trump's plan could also offer political benefits to Netanyahu, delighting rightwing voters with calls for the annexation of West Bank settlements and possibly appeasing some on the left with nominal support for a Palestinian state.

Just two weeks ago, the same pollster put Likud at 32 seats and Blue and White at 34, but it was too early to say if Trump's announcement was linked to an improvement in Likud's fortunes.

There is also a chance that Netanyahu's enthusiastic embrace of Trump's plan comes back to hurt Netanyahu, said Gadi Wolfsfeld, a professor of political science and communication at the IDC Herzliya college. 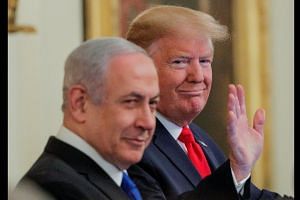 "I could see a scenario (where Arab Israelis) come out even more forcefully this election because of what's going on with Trump," Wolfsfeld said.

"And that of course will make it even more difficult for him to get to 61" - the number of seats needed to form a majority government.

The US proposal, viewed as overwhelmingly pro-Israeli, has been firmly rejected across the Palestinian political spectrum and by the Joint List alliance of mainly Arab Israelis.

And regardless of the impact of Trump's peace plan, Netanyahu will have to confront graft charges at the same time as fighting for re-election.

"There has to be a decision whether a man who's on trial can be given the chance by the president to form a coalition," Wolfsfeld told AFP.

"That would be maybe the president's discretion, maybe it will go to the supreme court," he added.

Either way, Netanyahu "has lots of obstacles to pass even if (the Trump plan) does him well."