An activist group affiliated with the boat named al-Awda (The Return), said 22 people - including two Singaporeans - and a cargo of medical supplies were on board.

According to a statement released by the group on Monday night, two Israeli citizens - including boat leader Zohar Chamberlain Regev - have been charged with attempting to enter Gaza and conspiracy to commit a crime, and were released on bail.

The rest are still being detained. They include Singaporean independent film-maker Jason Soo, 42, and orthopaedic surgeon Ang Swee Chai, 69, according to the activist group Freedom Flotilla Coalition (FFC), which organised the aid mission.

Soo is known for his documentary 1987: Untracing The Conspiracy, about detainees arrested under the Internal Security Act in 1987.

According to the group, Soo was with Dr Ang and was creating a documentary about her. Dr Ang quit her job in 1982 to treat casualties in war-torn Lebanon.

She is the widow of Mr Francis Khoo, a fellow activist who fled Singapore in 1977 to evade the Internal Security Department. She holds both Singapore and British passports.

In response to queries, a Ministry of Foreign Affairs (MFA) spokesman said: "MFA has contacted the Israeli authorities to request that Singaporeans involved be accorded due legal rights. All Singaporeans should comply with the laws of the countries they are visiting."

Malaysia's Ministry of Foreign Affairs said in a statement on Monday that a Malaysian - Dr Mohd Afandi Salleh from MyCare - was among those detained.

Shortly before the Awda was intercepted, the coalition released a statement saying the Israeli navy was issuing warnings to it.

"The Israeli navy claims our ship is breaking international law and threatens that they will use 'any measures necessary' to stop us," it said.

"In fact, the only 'necessary measures' would be to end the blockade of Gaza and restore freedom of movement for all Palestinians." It said afterwards on Twitter that the boat had been "hijacked by Israeli forces".

Israel has fought three wars with Palestinian militants in Gaza since 2008 and says the blockade is necessary to keep them from obtaining weapons or materials that could be used for military purposes.

UN officials and rights activists have called for the blockade to be lifted, citing deteriorating humanitarian conditions in the Palestinian enclave of two million people run by Islamist movement Hamas. 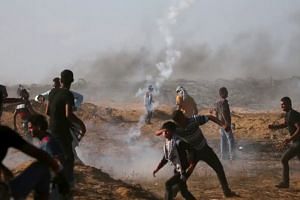 The Awda is the first of three vessels forming the flotilla that left Palermo, Sicily, on July 21, with 40 activists from 15 countries taking part in.

A second boat that is part of the same group, the Swedish-flagged Freedom, is expected to arrive in the same area in the next couple days, according to the FFC.

A 2010 attempt to breach the blockade ended in disaster. In that incident, Israeli commandos killed nine Turkish activists when they raided a six-ship flotilla trying to reach the Gaza Strip in defiance of the blockade. Another activist died years later.

The botched raid angered Turkey and saw it cut off ties with Israel until 2016.

Other attempts to run the Israeli blockade included a 2016 women's boat with 13 passengers, including Nobel Peace Prize winner Mairead Maguire of Northern Ireland.

Their sailing boat was halted by the Israeli navy and taken to Ashdod, about 30km north of Gaza, and the women were detained before being deported.