TEHERAN (AFP) - Iran's Foreign Minister Mohammad Javad Zarif was hit with US sanctions after turning down an invitation to meet President Donald Trump, officials in the Islamic republic said on Sunday (Aug 4).

The New Yorker magazine reported on Friday that Senator Rand Paul met Mr Zarif in the US on July 15 and had Mr Trump's blessing when he extended an invitation to the Iranian minister to go to the White House.

Officials in Iran confirmed the report on Sunday, heaping scorn on the Trump administration for claiming to want dialogue with Iran while slapping sanctions on its top diplomat.

"For a government to constantly claim (to favour) negotiations and afterwards sanction the foreign minister... if this is not ridiculous, then what is it?" said foreign ministry spokesman Ali Rabiei.

"In a meeting with a senator, he (Mr Zarif) is invited to come to a meeting and then he is sanctioned," Mr Rabiei said in remarks aired on state television.

"We believe that these sanctions show that the politicians of the White House have to some extent made a personal issue of affairs," he said, describing such behaviour as "childish".

Rear Admiral Ali Shamkhani, the secretary of Iran's Supreme National Security Council, said the invitation and sanctions amounted to a failure of US diplomacy. 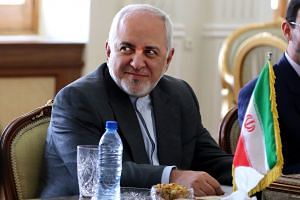 "Imposing sanctions on the honourable foreign minister of Iran after the refusal of Trump's proposal for face-to-face talks with him showed the 'maximum pressure' train has stopped at the 'failure station'," he said in a statement quoted by ISNA news agency.

Tensions between arch-enemies Iran and the United States have soared this year after Washington stepped up its campaign of "maximum pressure" against the Islamic republic.

Ships have been attacked, drones downed and oil tankers seized since May, after the United States withdrew from a landmark nuclear deal between Iran and world powers and reimposed biting sanctions against the country.

At the height of the crisis, Mr Trump called off air strikes against Iran at the last minute in June after the Islamic republic's forces shot down a US drone.

According to The New Yorker, Mr Zarif said it was up to Teheran to decide on accepting a meeting with Mr Trump.

Zarif told the magazine he would not want a White House meeting that yielded just a photo opportunity and a two page statement afterwards, it reported.

Mr Trump has said publicly several times that he is willing to hold talks with the Iranians even as he lambasts Teheran as a corrupt, incompetent and dangerous regime that is a threat to regional security and US interests.