LONDON/TEHERAN (REUTERS) - Iranian Supreme Leader Ayatollah Ali Khamenei said on Tuesday Tehran does not seek war with the United States despite mounting tensions between the two arch-enemies over Iranian nuclear capabilities and its missile programme.

In comments to senior officials carried by state television, Khamenei also reiterated that the Islamic Republic would not negotiate with the United States on another nuclear deal.

"There won't be any war. The Iranian nation has chosen the path of resistance," Khamenei was cited as saying by the state media. "We don't seek a war, and they don't either. They know it's not in their interests."

President Donald Trump withdrew the United States a year ago from a 2015 nuclear deal between Iran and global powers under which Tehran curbed its uranium enrichment capacity, a potential pathway to a nuclear bomb, and won sanctions relief in return.

Since then, Trump has ratcheted up sanctions on Iran, seeking to reduce its lifeblood oil exports to zero, to push Teheran into fresh negotiations on a broader arms control deal, targeting in part the Iranian ballistic missile programme.

"(Such) negotiations are a poison," Khamenei said.

The United Arab Emirates reported on Sunday that four commercial vessels including two Saudi oil tankers had been sabotaged offshore from the UAE emirate of Fujairah just outside the Strait of Hormuz. 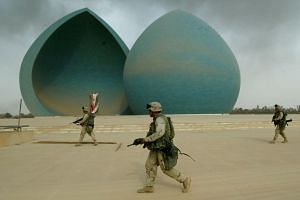 US national security agencies believe proxies sympathetic to or working for Iran may have been behind the attacks.

Iran has rejected the allegation and Iranian Foreign Minister Mohammad Javad Zarif said on Tuesday that "extremist individuals" in the US government were pursuing dangerous policies, stoking a war of words with Washington over sanctions.

Trump warned on Monday Iran would "suffer greatly" if it targeted US interests after Washington deployed an aircraft carrier and B-52 bombers to the Middle East.