TEHERAN (AFP) - Iranian President Hassan Rouhani said on Thursday (Jan 16) he wants to avoid war after Teheran and Washington appeared on the brink of direct military confrontation in early January for the second time in less than a year.

Ahead of parliamentary elections on Feb 21 - predicted to be a challenge for Rouhani's camp - and amid high tensions between Teheran and the West over Iran's nuclear programme, the president said dialogue with the world was still "possible".

"The government is working daily to prevent military confrontation or war," Rouhani said in a televised speech.

The region seemed on the brink of new conflict earlier in January after the US killed top Iranian general Qasem Soleimani in a drone strike in Baghdad, prompting Iran to retaliate against US military targets in Iraq with a volley of missiles days later.

The strike caused significant material damage but no casualties, according to the US military.

Rouhani said the strike amounted to "compensation" for the death of Soleimani, the architect of Iran's Middle East military strategy.

The tensions between the two enemies seemed to subside in the wake of the accidental downing of a Ukrainian passenger airliner hours after the retaliatory strikes, as Iran was on high alert for US reprisals.

Canada's foreign minister on Thursday vowed to push Iran for answers about the tragedy.

"Families want answers, the international community wants answers, the world is waiting for answers and we will not rest until we get them," Francois-Philippe Champagne said in London.

Ottawa said earlier that US President Donald Trump's policies had contributed to the heightened tensions that led to the catastrophe.

In June 2019, Iran and the US had also appeared to be on the brink of direct military confrontation after Teheran shot down a US drone it said had violated its airspace. 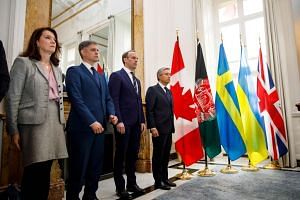 Trump said he called off retaliatory strikes at the last minute.

The animosity between Washington and Teheran has increased since Trump withdrew the US from the landmark 2015 nuclear deal in 2018 and reimposed biting sanctions.

In Iran, the air disaster sparked public outrage and anti-government demonstration took place every day from Saturday to Wednesday.

Security forces were deployed across the capital in response to the protests.

According to an AFP journalist, around 50 riot police with batons, motorbikes and what appeared to be tear gas launcher were posted at a major junction in north Teheran on Thursday evening.

Concentrated in the capital, the protests appeared smaller than a wave of national demonstrations in November, prompted by a fuel price hike. They had been met with a crackdown that left at least 300 people dead, according to Amnesty International.

Rouhani implicitly acknowledged a crisis of confidence in authorities, but looked to regain control on Wednesday, calling for "national unity", better governance and more pluralism.

On Thursday, Rouhani also defended the policy of openness to the world that he has pursued since his first election in 2013, and which Iran's ultra-conservatives criticise.

"Of course, it's difficult," he acknowledged, but he added, "the people elected us to lower tensions and animosity" between the Islamic republic and the world.

Rouhani said that with the nuclear deal "we have proven in practice that it is possible for us to interact with the world."

Rouhani was speaking the day before supreme leader Ayatollah Ali Khamenei is expected to lead the main weekly Muslim prayers in Teheran for the first time since 2012.

Khamenei, who maintains the West is not trustworthy, bans dialogue with Trump.

On Thursday, Rouhani said Iran's "daily enrichment" of uranium was currently "higher" than before the conclusion of the 2015 nuclear deal.

Rouhani, who instigated the negotiations, made the comments while justifying his nuclear policy and Iran's progressive disengagement from the accord. He also stated his willingness to continue dialogue on the agreement.

In response to the US withdrawal from the deal and sanctions, an increasingly frustrated Iran has hit back with a step-by-step suspension of its own commitments under the deal, which drastically limited its nuclear activities.

On Tuesday, Germany, Britain and France - the three European parties to the deal - announced they triggered a dispute mechanism in response to the latest step back from the deal by Teheran.

But Germany on Thursday confirmed a Washington Post report that the US had threatened to impose a 25 per cent tariff on imports of European cars if EU governments continued to back the nuclear deal.

Iranian Foreign Minister Mohammad Javad Zarif accused the European parties of having "sold out" the deal to avoid trade reprisals from the US and said Trump was again behaving like a "high school bully".