JERUSALEM (BLOOMBERG, REUTERS) - An Iran-backed Iraqi militia broke up its encampment outside the US embassy in Baghdad, a move that could ease tensions between Teheran and Washington which escalated after fighters attacked the compound.

The Popular Mobilisation Units (PMU) had called on the fighters and their supporters to leave the area on Wednesday (Jan 1), "out of respect for the decision of the Iraqi government that ordered this and to preserve the stature of the state".

The last protesters were gone by late afternoon and moved their tent camp across the Tigris river to an area facing the embassy, militia members reported.

The PMU is the umbrella group to which the Kataib Hizbollah paramilitary unit belongs. The assault on the embassy on Tuesday was precipitated by deadly US airstrikes against Kataib Hizbollah bases in Iraq and Syria earlier in the week, and carried out by group fighters and their supporters.

"The message of the protesters has been delivered," Foreign Affairs Minister Mohamad Alhakim said on Twitter.

The US embassy said all public consular operations are suspended until further notice.

The rare direct US assault on the Iran-backed militia and the attack on the embassy threatened to spiral into a broader confrontation.

The US and Iran are already facing off over the Trump administration's crippling economic campaign against Teheran and suspected Iranian reprisals, and additional American forces were ordered to the region after Tuesday's embassy attack.

US officials said 750 extra troops would initially be based out of Kuwait and as many as 4,000 troops could be sent to the region in the coming days if needed. More than 5,000 US troops are stationed in Iraq supporting local forces. The air strikes have galvanised calls inside Iraq to expel them.

President Donald Trump, who faces re-election in 2020, on Tuesday threatened to retaliate against Iran, but said later he did not want to go to war.

Iran has denied involvement in the embassy attack. Iran's supreme leader Ayatollah Ali Khamenei warned that his country was ready to strike back "unhesitatingly" against any retaliation from Washington. 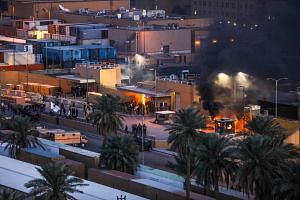 Trump says does not expect war with Iran, following attack on US embassy in Iraq

Trump blames Iran as protests erupt outside US embassy in Iraq

Iran blasts 'audacity' of US to blame it for Iraq violence

The semi-official Tasnim news agency reported that Teheran summoned the Swiss charge d'affaires, who represents US interests in Iran, to relay its objections to the American airstrikes.

The US raids were ordered in retaliation for a rocket assault in Iraq that killed an American contractor involved in the US-led fight against Islamic State in Iraq and Syria (ISIS) militants.

Iraq has been roiled in recent months by anti-government protests fuelled, in part, by Teheran's powerful influence over the country.

US officials had boasted that anti-Iran protests in Iraq signalled a grassroots rebellion against Teheran's influence, but the attack on the embassy turned Washington into the focus of anger instead.

On Tuesday, Iraq's outgoing prime minister Adel Abdul Mahdi reiterated his denunciation of the US raids, but called on protesters to leave the compound immediately, threatening severe penalties for attacks on the mission.

Earlier on Wednesday, US troops fired tear gas to disperse pro-Iran fighters and their supporters gathered outside the embassy.