Iranian oil exports have plunged about 35 per cent since April, the month before Trump ripped up the diplomatic deal that Barack Obama negotiated to curtail Teheran's nuclear programme and announced new oil sanctions.

The bigger-than-expected reduction, with more to come, is a win for Trump, who made a tougher stance on Iran a cornerstone of his foreign policy and imposed the sanctions despite opposition in Europe and open hostility from China and India, the top buyers of Iranian crude.

When the sanctions were first announced, their unilateral nature prompted many in the oil market to question their effectiveness.

Oil accounts for nearly 80 per cent of Iran's tax revenue, according to the International Monetary Fund, making petroleum the regime's economic lifeblood. As oil exports have plunged, Iran's currency - the rial - has dived 60 per cent on the unofficial market, pushing up inflation.

While the success of sanctions will help Trump put pressure on Iran, there may be a less welcome side effect: higher oil prices for US consumers in the run-up to November's mid-term elections.

The sanctions are reverberating through the global oil market, pushing benchmark Brent oil above US$80 a barrel last week.

Even though Russia and Saudi Arabia, which have cooperated closely in oil over the last two years, have offset some of the impact by boosting their own output, traders are betting it won't be sufficient to replace all the losses from Iran.

"The physical market has clearly tightened, reinforcing the bullish narrative on geopolitical and supply risks," said Thibaut Remoundos, founder of Commodities Trading Corporation Ltd. who's been trading oil for more than 20 years.

It's not just the headline oil price that shows the market impact of US sanctions. As oil refiners from China to France scramble to find alternative supplies, they are pushing up the prices of crudes that can substitute for lost Iranian shipments.

Russia's Urals blend, for example, is trading at its highest premium to the Brent benchmark since the beginning of the year. Chinese refiners recently bought large amounts of Urals from the port of Rotterdam, an unusually long voyage. Oman crude is also unusually expensive, and Basrah Light of Iraq is selling better than usual.

The unilateral American sanctions, which formally only take effect on Nov 4, have scared buyers in Europe and Asia, including Japan and India. In the first two weeks of September, Iran sold an average of 1.6 million barrels a day, down from 2.5 million barrels a day in April, according to Bloomberg tanker tracking. 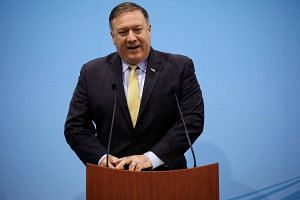 A group of oil-market analysts predicted in April that sanctions wouldn't cut exports by more than 800,000 barrels a day.

Even though European countries opposed Trump's actions, and have reassured Iran's government that they want the nuclear deal to continue, European refiners have had little choice but to comply with sanctions. Washington can cut off access to the US financial system for any company judged to be doing business with Iran.

With early indications that European nations and Japan will stop buying Iranian crude altogether next month, the country's exports can easily drop another 350,000 barrels a day by November, down to about 1.3 million barrels a day. South Korea, a major importer of Iranian crude in the past, hasn't shipped any oil from Iran for 75 days.

Iran isn't just losing customers for its crude, like it did under earlier sanctions from 2012 to 2015, but also for condensate, a form of super-light oil used mostly in the petrochemical industry. With South Korea not buying any, total Iranian exports of condensate dropped in the first half of September to 175,000 barrels a day, down more than 40 per cent from April.

The earlier-than-expected decline in both crude and condensate exports appears to be a reaction to US banking and shipping insurance sanctions that went into effect over the summer.

"The first wave of sanctions in August sent the message to the market that the US was serious, and I think has resulted in these early cuts to Iranian exports ahead of the Nov 4 implementation of oil sanctions," said Joe McMonigle, energy analyst at Hedgeye Risk Management LLC and a former senior official at the US Energy Department.

Iran has tried to offset some of the impact by offering China and India, two countries likely to keep buying at least some oil, to ship the crude using its own tankers at no extra cost, effectively giving New Delhi and Beijing a small discount.

So far, it doesn't appear to be working: in the first two weeks of September, India has loaded just 240,000 barrels a day of Iranian oil, less than half the usual amount.

In the starkest sign that buyers are running away, Iran is now starting to store unsold crude in supertankers, a practice known as floating storage that it also used during the Obama-era sanctions.

Despite the initial success, the White House is still far away from its official aim of cutting Iran's oil revenues to "zero." But there are reasons to think exports could plunge lower still.

After Nov 4, even the countries that continue buying Iranian oil will struggle to transfer the money back to Teheran, potentially stranding billions of dollars in revenues overseas and forcing Iran into barter deals that swap crude for other goods, traders said.

In that way, oil exports will remain above zero, but Iran will receive only a portion of the revenues.

"The loss of Iranian exports is gaining pace," said Amrita Sen, chief oil analyst at Energy Aspects Ltd. "This has led to a rise in floating storage off Iran and onshore storage is nearly full."