ISTANBUL (WASHINGTON POST) - Saudi Arabia's decision to acknowledge the death of Saudi journalist Jamal Khashoggi followed calls for justice from around the world. But no individual had put more pressure on the oil-rich monarchy than Turkish President Recep Tayyip Erdogan.

After Mr Khashoggi disappeared at the Saudi Consulate in Istanbul, Mr Erdogan and his aides did more than just quietly investigate: They narrated the crisis, focusing the world's attention on what they said was a brazen, state-sponsored assassination on its soil.

Grisly details of the alleged killing were released to the Turkish and international news media. Mr Erdogan publicly upbraided Saudi Arabia's leaders, accusing them of obstructing the probe.

Turkey's revelations may have helped push the Saudi government to reverse its repeated denials of wrongdoing and announce early on Saturday (Oct 20) that it had arrested 18 people and fired several top officials in the case. Saudi officials said Mr Khashoggi was killed in a fight inside the consulate.

In a final act of Turkish pressure, prosecutors said on Friday that they were interviewing Turks who worked at the consulate - employees who might have insight into the movements and actions of Saudi officials around the time Mr Khashoggi disappeared.

Turkey's Foreign Minister, Mr Mevlut Cavusoglu, also warned that when Turkey completed its investigation, it would share the results "with the world".

For Mr Erdogan, the benefits of turning up the heat on Saudi Arabia and its young Crown Prince Mohammed bin Salman were apparent, analysts said. The two countries have competed for influence in the Middle East and clashed over Turkey's support for Qatar in a feud that divided the region. 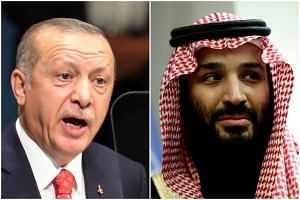 Suddenly toxic, Saudi prince is shunned by investors he courted

Mr Erdogan has little personal affection for Crown Prince Mohammed, who referred to Turkey this year as part of a regional "triangle of evil" along with Iran and regional Islamist groups.

The Khashoggi investigation, with its allegations of high-level collusion by Saudi officials, provided Turkey an opportunity to damage the crown prince's reputation, analysts said, and to drive a wedge between Saudi Arabia and the United States.

The Turkish President has also said he regarded Mr Khashoggi as "a friend".

Mr Erdogan may be seeking other leverage for Turkey as well, including preventing Saudi meddling in Syria along Turkey's border, and financial aid or relief from the United States or the Saudis, analysts said.

The crisis provided a measure of respite for Turkey, at a time when Mr Erdogan was facing criticism at home for the ailing Turkish economy and criticism abroad for detaining foreign nationals and engaging in "hostage diplomacy".

Instead, Mr Khashoggi's case thrust Mr Erdogan into the ironic role of defender of journalistic freedom and dealmaker between the United States and Saudi Arabia as the two long-time allies have sought to manage the blowback over what many have concluded was Riyadh's unrepentant killing of a prominent critic.

If Mr Khashoggi's status as a veteran journalist who wrote for The Washington Post first helped elevate his case from local mystery to global crisis, Turkey's response amplified his plight.

Four days after Mr Khashoggi's disappearance on Oct 2, Turkish officials shared their explosive conclusions with the news media: He had been killed soon after he entered the consulate to obtain papers that proved he was divorced.

His murder, the investigators added, was at the hands of a 15-man "hit team" dispatched from Riyadh to silence Mr Khashoggi, who had written columns in the Post criticising the crown prince.

Leaks about the case seemed to dry up about a week ago. But they started again, more lurid than before, after President Donald Trump speculated that "rogue killers" were behind Mr Khashoggi's disappearance and as Secretary of State Mike Pompeo travelled to Riyadh, the Saudi capital, and was photographed smiling next to the crown prince.

The leaks fuelled speculation that Mr Erdogan was raising the cost of his government's cooperation with Saudi Arabia, which badly wants to put the Khashoggi incident behind it.

US officials had expected Saudi Arabia to take responsibility for Mr Khashoggi's death, but to explain it in a way that shielded the crown prince from responsibility.

The announcement early on Saturday appeared to meet that criteria, though it immediately came under criticism from policymakers in Washington.

Mr Erdogan, however, can claim that Riyadh arrested two senior Saudi officials as a result of his pressure campaign and walk away satisfied.

"The Turks have leaked information in drips and drops, ultimately in my estimation to increase the price of settlement," said Mr Joshua Walker, a former Turkey specialist at the State Department.

"Turkey has been in a tough economic situation since the summer, and as we have seen with its relationship with Qatar, it is not above leveraging its relationships," he said, referring to a pledge by Qatar in August to invest US$15 billion (S$20.6 billion) in Turkey.

There is no indication that Mr Erdogan has asked for monetary compensation or political favours from Riyadh, but Western diplomats suspected that Saudi Arabia would compensate Turkey if it blessed the kingdom's explanation for Mr Khashoggi's disappearance - a payback that could come in the form of large-scale debt relief, strategic buyouts or other arrangements.

"Right now, what Turkey needs most is financial support. The economy is still brittle, it hasn't recovered from the crash of its currency this summer, and Turkey is expected to face a massive fine for Iran-related sanctions," said Dr Soner Cagaptay, a Turkey scholar at the Washington Institute for Near East Policy.

"Erdogan is a master of creating an opportunity out of a crisis," he said. "He's an excellent politician in that regard, and he's looking for an opportunity."

But Ms Asli Aydintasbas, a fellow at the European Council on Foreign Relations, said that Turkey's goals were primarily strategic and that it was looking, among other things, for a "readjustment of US policy" that had relied heavily on the Saudi crown prince as the linchpin of the Trump administration's strategy to isolate Iran.

"They don't want the Americans to base their whole policy on Mohammed bin Salman," she said, but at the same time, Turkey does not expect the United States to pivot from the alliance with Saudi Arabia.

Turkey's aim, she added, is to deter "the more thuggish behaviour associated with Mohammed bin Salman and the United Arab Emirates", a key Saudi ally.

But the leaks, and the pressure they created, carry risks for Turkey as it tries to avoid a total diplomatic break with the Saudis and worries about Saudi retaliation, analysts said.

Mr Erdogan "doesn't want to go it alone against the Saudis", said Dr Gonul Tol, the director of the Middle East Institute's Centre for Turkish Studies. "They want to frame this as a world problem."

Mr Pompeo on Thursday said he had asked the White House to give Saudi Arabia "a few more days to complete" its investigation, even as he came under fire for failing to get answers about Mr Khashoggi's fate in his fact-finding mission to Riyadh and Ankara this week.

The Saudi crown prince, in private discussions with US officials, had vociferously denied any involvement in Mr Khashoggi's disappearance, saying he would never be so stupid as to order the type of assassination being alleged, according to diplomats familiar with the conversations, who spoke on condition of anonymity to discuss the sensitive topic.

Critics had accused the United States of buying the Saudis time to come up with a plausible scenario that exonerated the crown prince.

But as the Turkish authorities continued to leak more gruesome details to the press, Mr Trump took an increasingly dim view of the situation, acknowledging for the first time on Thursday that he believed Mr Khashoggi was no longer alive.