BAGHDAD (AFP, REUTERS, NYTIMES) - Islamic State in Iraq and Syria (ISIS) militants on Wednesday (June 21) blew up Mosul's iconic leaning minaret and the adjacent mosque where their leader Abu Bakr al-Baghdadi in 2014 declared himself "caliph" in his only public appearance, Iraqi officials said.

The destruction of two of Mosul's best-known landmarks comes on the fourth day of an Iraqi offensive backed by the US-led coalition to take the Old City, where holdout ISIS extremists are making a bloody last stand.

It adds to a long list of Iraqi heritage sites and monuments the terrorist organisation has destroyed in Iraq and Syria since Baghdadi created his "caliphate" straddling both countries and urged the world's Muslims to move in.

The Grand Al-Nuri mosque was named after Nuruddin al-Zanki, a nobleman who fought the early crusaders from a fiefdom that covered territory in modern-day Turkey, Syria and Iraq. 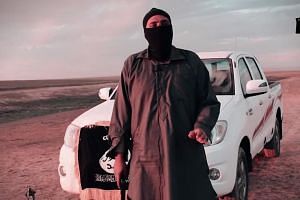 ISIS have executed 2,000 in Iraq's Mosul region since takeover

By the time renowned medieval traveller and scholar Ibn Battuta visited it two centuries later, the 45m minaret was leaning to one side. The tilt gave the landmark its popular name: Al-Hadba, or the hunchback.

It was built with seven bands of decorative brickwork in complex geometric patterns, also found in Persia and Central Asia.

Nabeel Nouriddin, a historian and archaeologist specialising in Mosul and the Nineveh region, said the minaret has not been renovated since 1970, making it particularly vulnerable to blasts, even if it was not directly hit.

Al-Hadba lies next to the Nuri mosque and was the most loved and recognisable landmark in Mosul, and was sometimes referred to as Iraq's Tower of Pisa.

The minaret, with its unmistakeable shape, was the symbol of the city and featured in many local shops signs and advertisements.

It has lent its name to countless restaurants, companies and sports clubs.

The destruction of the mosque and minaret - which has dominated Mosul's skyline for centuries and is pictured on Iraq's 10,000 dinar bank note - is another blow to the city's rich cultural heritage and its plethora of ancient sites that have been damaged or destroyed during three years of ISIS rule.

For residents of Mosul and those who care about Iraq's history, the destruction was yet another painful loss, after so many years of the ISIS violently erasing a region's history.

Before ISIS took control of Mosul, Unesco had begun an effort to protect and rehabilitate the minaret.

"You can find it on money notes, you can find it in scrapbooks," said Rasha Al-Aqeedi, who grew up in Mosul and is now a research fellow at the Al-Mesbar Studies and Research Centre in Dubai, in the United Arab Emirates.

"It's everywhere. I don't know how to put it into words. It's just something people always identified with because it was always there."

Ali al-Nashmi, a prominent Iraqi historian, referring to the terrorists, said: "These dogs, they are the worst of what God has created. I swear to God I cannot imagine Mosul without Al-Hadba."

Staff Lieutenant-General Abdulwahab al-Saadi, one of the top commanders of the Counter-Terrorism Service that has spearheaded the fight against ISIS, explained why he thought the Nuri mosque and nearby Al-Hadba would almost inevitably be destroyed.

"The mosque has some symbolism for the terrorist gangs, being the mosque where Abu Bakr al-Baghdadi gave his first sermon" as ISIS leader, he told AFP on Monday from his command post on the edge of Mosul.

"Perhaps, they won't want to leave this place that Abu Bakr al-Baghdadi took to the security forces and maybe they'll send a message accusing Iraqi units of destroying them," he predicted.

The US-led coalition, which carries out daily air strikes and has advisers on the ground supporting the Mosul operation, condemned the destruction.

"This is a crime against the people of Mosul and all of Iraq, and is an example of why this brutal organisation must be annihilated," said Major-General Joseph Martin.