NICOSIA (AFP) - The strategic Golan Heights, long disputed by Syria and Israel, was largely occupied by Israel in 1967, which later annexed the section it controlled in a move never recognised internationally.

US President Donald Trump tweeted Thursday (March 21) that "after 52 years it is time for the United States to fully recognize Israel's Sovereignty over the Golan Heights."

A vital source of water in the arid region, the Golan Heights overlooks Galilee and Lake Tiberius on the Israeli side, which amounts to around 70 per cent of the territory.

The armistice line with the Syrian-controlled side lies just 50 kilometres (30 miles) from Damascus.

Here is some background.

Syrian forces used the Golan Heights to fire on Israel during the 1967 war, prompting the Israeli army to enter and seize 1,200 square kilometres (460 square miles) of territory.

Israel occupied a further 510 square kilometres during the next war in 1973, but that was returned a year later in a deal that drew a ceasefire line and created a demilitarised buffer zone, monitored by a UN observer force.

In 1981 Israel passed a law formally annexing the occupied area.

Around 18,000 Syrians from the Druze sect - most of whom refuse to take Israeli citizenship - remain in the occupied Golan.

Around 20,000 Israeli settlers have moved in, spread over 33 mostly agriculture-based settlements.

The fertile volcanic plateau, famed for its apples, is also key to the region's water supply - an important issue in stalled peace talks between Israel and Syria, which remain technically at war.

Three tributaries - the Banias, the Dan and the Hasbani - cross the highlands and help form the headwaters of the Jordan River.

The river system, which flows into the Sea of Galilee, provides about 40 per cent of Israel's water.

Syria has demanded a return to the pre-1967 border, which would give it a foothold on the shore of Galilee and rights to the lake's waters.

Israel wants guarantees over its control of the vital water source.

After a fairly quiet period, tensions flared in the Golan Heights with the start of the 2011 uprising against Syrian President Bashar al-Assad's regime.

That year, in protests marking the anniversaries of the creation of Israel and the 1967 war - in May and June respectively - Palestinian refugees living in Syria rushed the ceasefire line.

Israeli troops opened fire, killing around 30 people, according to the UN.

The area has since witnessed fierce fighting between Syrian rebels and the regime, with fire occasionally landing in occupied territory and prompting Israeli retaliation.

In 2014, 45 UN observers were held hostage for two weeks by Al-Nusra Front, then Al-Qaeda's Syrian affiliate.

Israel has occasionally clashed with the Syrian regime and with its Iran-backed ally Hezbollah in the Golan Heights. 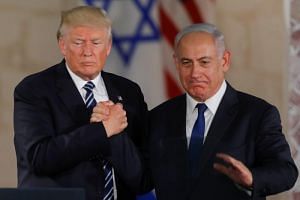 Israel is concerned that Tehran and the Lebanese militia are embedding themselves along its frontier.

In January 2015, an Israeli strike targeted Hezbollah on the Syrian side of the demarcation line, killing Iranian soldiers, including a general.

This month, Israel's army said it had uncovered a unit created by Hezbollah across the ceasefire line in the Syrian Golan Heights, led by a commander previously jailed over an attack on US forces.

In its latest human rights report published on March 14, the United States referred to the Golan Heights as "Israeli-controlled" as opposed to "Israeli-occupied".

US' move has been denounced by the Muslim world, from Saudi Arabia to Indonesia. It also triggered direct or implied criticism from European countries and organisations, including Britain, Germany, France, the European Union and Russia.