AL-DURAYHIMI (AFP) - Yemeni medics scrambled to save a 20-year-old woman after a sniper's bullet tore a gash in her scalp in the port city of Hodeida, where a fragile ceasefire has brought limited respite to war-weary civilians.

A truce brokered in Sweden in December between the Saudi-backed government and Houthi rebels was hailed as Yemen's best chance so far to end the four-year conflict, but it appears to be hanging by a thread, with breaches reported by both warring parties.

Civilians in Hodeida, the war-ravaged country's main conduit for food and humanitarian aid, are caught between a bloody ceasefire and the prospect of an even bloodier conflict if the United Nations-brokered truce breaks down.

"There is no truce," said Mr Ali Hassan Marzouqi.

His daughter Hayat was rushed to a field hospital in the village of Al-Durayhimi, on the southern edge of Hodeida, after a stray bullet grazed her head while she was sitting at home.

"Snipers, improvised explosive devices, mines and mortars," said Mr Iyad Nasser, deputy head of the hospital, rattling off the nature of casualties reported every day since the truce.

Despite the ceasefire, mortar shells continue to crash into camps near Hodeida, which are bursting with ever more displaced Yemenis - many of them malnourished. 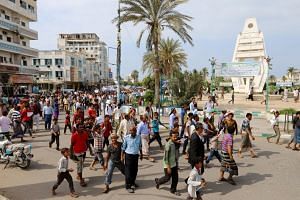 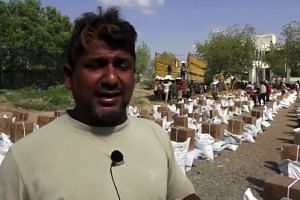 Fighting breaks out in Yemen's Hodeidah after truce deal: Residents

Yemen conflict: Abuses by all parties

"Before the ceasefire, my house was hit," Mr Mohammed Saleh, 46, said at a camp in the nearby town of Khokha.

"After the ceasefire, my tent was hit. Nothing has changed."

Many at the camp fear returning to their homes and farm lands despite the truce, accusing the rebels of rigging them with mines - often camouflaged as rocks - as punishment for fleeing to government areas.

AFP travelled to Hodeida last week on a military embed organised by the Saudi and Emirati-led coalition fighting the rebels.

Hospitals around the city have noted a reduction in fatalities since the truce took effect, local fishermen have felt safer going out to sea and aid workers have managed to reach starving communities previously cut off by war.

But the ongoing bloodshed has fuelled a bleak view shared by dozens of civilians and military officials interviewed by AFP - that the ceasefire is likely to collapse, pushing Hodeida into a deeper spiral of conflict that could precipitate famine.

"While the truce agreement initially brought some hope and relief, Hodeida's poorest residents live under the shadow of a resumption of conflict, particularly as the implementation of deconfliction processes remains slow at best," said Mr Adam Baron, a Yemen expert at the European Council on Foreign Relations.

Further casting doubt on the fate of the ceasefire, UN special envoy Martin Griffiths on Monday (Jan 28) said some of the terms agreed during the Sweden talks, including a prisoner swap deal between the warring parties, had been delayed.

The Houthis are using the truce to fortify their positions inside Hodeida, with a maze of shipping containers, trenches and sniper nests inside dense residential neighbourhoods, residents told AFP, in what they believe are preparations for a resumption of war.

UN chief Antonio Guterres has separately pointed to Houthi allegations that pro-government forces were massing troops close to the city.

Colonel Saeed Salmeen, an Emirati commander on Yemen's west coast, denied the allegation but said his men were ready for battle if required.

"The coalition and the Yemeni government will have to cope with an unforgiving international climate if battle recommences," said Dr Michael Knights, a fellow at The Washington Institute for Near East Policy.

"Though the Houthis appear to have deliberately sought a collapse of the ceasefire, performing provocative strikes... blame will probably accrue to the coalition if they advance in Hodeida."

US lawmakers have demanded greater accountability from Saudi Arabia for its military campaign in Yemen, after journalist Jamal Khashoggi's murder put Riyadh's role in the conflict under the spotlight.

As they watch wounded fellow soldiers pour into hospitals during the ceasefire, their bodies sometimes riven with shrapnel, pro-government loyalists evince frustration that the truce halted their offensive just as they got tantalisingly close to the rebel-held port.

Capturing the port, a key revenue earner for the rebels, is touted by loyalists as a possible game changer that would finally force the Houthis to their knees.

"We have manpower, firepower and morale," said a government loyalist, requesting anonymity.

"But we are doing our best to control our temper, our troops" because of the truce, he said.

Another loyalist went further, insisting that military action was the only solution, a sentiment echoed by many.

"When we cut off their main nerve, we will finish them off forever."