MOSUL (AFP) - As the battle to retake Iraq's Mosul from the Islamic State in Iraq and Syria (ISIS) drew to an end, dozens of women and their children emerged exhausted and grief-stricken from the ruins.

Around 15 women and children huddled on a shaded pavement out of the scorching sun at the edge of the Old City, as automatic weapons fire and mortar rounds resound inside.

Iraqi forces fighting ISIS had brought them from the Al-Maidan area inside the city's historic centre, where extremists were making a last stand ahead of an imminently expected defeat.

A young mother in her 20s crouched silently against a wall, dressed in a black robe and light blue scarf.

Suddenly, she doubled up on the pavement, begging the nearest soldier to listen to her distress.

Only an hour earlier, she had lost her seven-year-old son in a bombardment, just as she and her family prepared to leave the Old City after months of hiding from the jihadists. 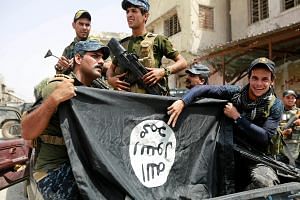 ISIS: From founding to defeat in Mosul

"There was nothing I could do," she said, her face distorted with grief as her eldest daughter tried to wipe away her tears.

"Don't cry, Mummy," said the 10-year-old, whose burgundy dress was drenched in her little brother's blood.

Fatima, a woman in her 50s, burst into tears recounting her and her family's ordeal over the past four months.

They hid "almost without food or water" in a basement watched by the extremists, she says, praying not to be hit in the fighting.

They emerged when their street seemed to have been retaken by Iraqi forces, seeing the sky for the first time in weeks as they hurried out of the area towards freedom.

But a sniper hit Fatima's brother as they fled, and she had had no news of him since he was taken away in an ambulance.

Beside her, another woman cried, eyes lifted towards the sky and desperately chanting a man's name.

Liqaa was forced to leave her brother's body behind after he too was shot down by an ISIS sniper.

'Whose child is this?'

Iraqi forces are fighting the last ISIS fighters inside Mosul, on the verge of retaking the city after three years of extremist rule.

Around 250 displaced people arrived from the Old City on Saturday alone, an employee of a local non-governmental organisation said, asking to remain anonymous.

"A quarter are wounded, mostly by mortar rounds or sniper fire from jihadists targeting fleeing civilians," the employee said.

Among the women, some watch out for their men, several of whom are being screened by Iraqi fighters tasked with making sure no militant escaped among the fleeing civilians.

But others, already widows, no longer had anyone to wait for.

Soldiers and first aid workers handed out biscuits, water and orange juice to the children, who often arrive dehydrated.

On the pavement, a tiny girl of around three years old, brown hair tousled and wearing a turquoise dress, stands alone, clutching a half empty plastic water bottle.

"Whose child is this?" shouted a soldier. But around her, the women are too distraught to reply.

Among the women who had fled their homes, those without relatives to stay with will be directed towards one of the camps for the displaced around the city.

Around 915,000 residents had run from their homes since the start of the battle for Mosul in October, the United Nations said two days before, including 700,000 who have yet to return.

Not far off, Samira, a mother in her 20s, held close her two daughters, terrified and covered in dirt.

She cradled her last born, a motionless baby with a grey complexion.

ISIS "would beat us as soon as we tried to leave. And outside, there was bombardment. It was terrifying," Samira said.

Her infant suddenly started crying, much to the relief of onlooking aid workers.