CAIRO - An EgyptAir plane flying from Alexandria to Cairo was hijacked and forced to land in Cyprus on Tuesday (March 29) but the passengers and crew were freed unharmed.

The hijacker, who was wearing a fake suicide belt and whose motives remain a mystery, was arrested after giving himself up.

Eighty-one people, including 21 foreigners and 15 crew members, had been on board the Airbus 320 flight when it took off, Egypt’s Civil Aviation Ministry said in a statement.

Conflicting theories emerged about the hijacker’s motives, with Cypriot officials saying early on the incident did not appear related to terrorism but the Cypriot state broadcaster saying he had demanded the release of women prisoners in Egypt.

After the aircraft landed at Larnaca airport, negotiations began and everyone on board was freed except three passengers and four crew, Egypt’s Civil Aviation Minister Sherif Fethy said.

Soon after his comments, Cypriot television footage showed several people leaving the plane via the stairs and another man climbing out of the cockpit window and running off.

The hijacker then surrendered to the authorities. “Its over,” the Cypriot Foreign Ministry said in a tweet. 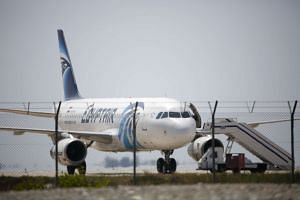 5 things to know about EgyptAir, and the airports involved in the hijack crisis 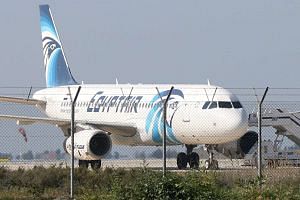 In Pictures: The hijacked EgyptAir A320 plane in Cyprus

The hijacker, who is in custody after surrendering to the police following a six-hour stand-off at Larnaca airport, had claimed to be wearing an explosives belt, Egyptian officials said.

Counter-terrorism police frisked the hijacker on the tarmac then interrogated him for more than an hour before boarding the plane and searching it with sniffer dogs.

Speaking to reporters after the crisis ended, Egyptian Prime Minister Sherif Ismail said the hijacker was an Egyptian national but that his motives remained unclear.

“At some moments he asked to meet a representative of the European Union and at other points he asked to go to another airport but there was nothing specific,” he said, adding that the man would now be questioned to ascertain his motives.

Cypriot Foreign Ministry official Alexandros Zenon told reporters during the crisis that the hijacker apppeared to be “unstable”.

Egypt’s Civil Aviation Ministry said the plane’s pilot, Mr Omar al-Gammal, had informed the authorities that he was being  threatened by a passenger who claimed to be wearing a suicide explosives belt and had forced him to divert the plane to Larnaca.

Photographs shown on Egyptian state television showed a middle-aged man on a plane wearing glasses and displaying a white belt with bulging pockets and protruding wires.

Ben Innes from #Aberdeen poses for a picture with #EgyptAir #MS181 hijacker. pic.twitter.com/ywdGYuDWwm

But the Cypriot authorities have determined that the belt did not contain explosives, Egypt’s Civil Aviation Ministry said in a statement.

“Security in Cyprus confirmed that the explosive belt worn by the man who hijacked the plane was fake,” it said.

Mr Fethy, the Egyptian minister, said earlier that the authorities suspected the suicide belt was not genuine but treated the incident as serious to ensure the safety of all those on board. “Our passengers are all well and the crew is all well... We cannot say this was a terrorist act... he was not a professional,” Mr Fethy told reporters after the incident.

In the midst of the crisis, witnesses said the hijacker had thrown a letter on the apron in Larnaca, written in Arabic, asking that it be delivered to his ex-wife, who is Cypriot.

But the Cyprus Broadcasting Corporation (CyBC) said the hijacker had asked for the release of women prisoners in Egypt, suggesting a political motive.

EgyptAir also delayed a New York-bound flight from Cairo onto which some passengers of the hijacked plane had been due to connect. Mr Fethy said it was delayed partly due to a technical issue but partly as a precaution.

The plane remained on the tarmac at Larnaca throughout the morning while Cypriot security forces took up positions around the scene. “The hijacking is not terrorism-related,” he told a joint news conference with the visiting president of the European Parliament, Mr Martin Schultz. Asked about reports that the hijacker had demanded to see a Cypriot woman, Mr Anastasiades said: “Always there is a woman.”

Cyprus' Ministry of Foreign Affairs has named the suspect as Seif Eldin Mustafa in a tweet.

Earlier in the day, Egyptian state television had named the suspect as Ibrahim Samaha. He is reportedly a professor of veterinary medicine at Alexandria University, a staff list on the university website showed.

The Egyptian government has apologised to Mr Samaha for misidentifying him, reported Al-Arabiya.

The hijacker contacted the control tower at 8.30am on Tuesday (1.30pm Singapore time) and flight MS 181 was given permission to land at 8.50am at Larnaca airport on the south coast, the Cypriot police said.

The airport has been closed, with flights diverted to Paphos.

Hijackers asked all police forces to leave the area in order to release women and children passengers.....

While the reasons for the hijacking were not entirely clear, the incident will deal another blow to Egypt’s tourism industry and hurt efforts to revive an economy hammered by political unrest following the 2011 uprising.

The sector, a main source of hard currency for the import-dependent county, was already reeling from the crash of a Russian passenger plane in the Sinai in late October.

President Abdel Fattah al-Sisi has said the Russian plane was brought down by a terrorist attack. Islamic State has said it planted a bomb on board, killing all 224 people on board.

The incident has raised renewed questions over airport security in Egypt, though it was not clear whether the hijacker was even armed. Mr Ismail said stringent measures were in place.

There was also some confusion over the identity of the hijacker. Egypt’s official state news agency Mena initially named him as Egyptian national Ibrahim Samaha but later said the hijacker was called Seif Eldin Mustafa.

Cyprus has seen little militant activity for decades, despite its proximity to the Middle East.

A botched attempt by Egyptian commandos to storm a hijacked airliner at Larnaca airport led to the disruption of diplomatic relations between Cyprus and Egypt in 1978.

In 1988, a Kuwaiti airliner which had been hijacked from Bangkok to Kuwait in a 16-day siege had a stopover in Larnaca, where two hostages were killed.

Egypt said it would send a plane to Cyprus to pick up stranded passengers, some of whom had been traveling to Cairo for connecting flights abroad.

The hijacked flight #MS181 is currently standing on ground at Larnaca Airport with transponder on pic.twitter.com/9phFjuXUaX

Militant attacks in Egypt have surged since 2013, hampering the country’s efforts to revive its economy and lure in foreign investors.

Global airline and airport security officials are on heightened alert after bombs ripped through the airport in Belgium’s capital Brussels last week.

Asian airports had stepped up checks since the Paris terrorist attacks and the suspected bombing of the Russian aircraft over Sinai.