SANAA (AFP) – A strike on a bus in rebel-held northern Yemen killed at least 29 children on Thursday (Aug 9), the Red Cross said, as the Saudi-led coalition faced a growing outcry over the attack.

The coalition said it had carried out what it called “legitimate military action” in the area targeting Huthi rebels responsible for a deadly missile attack on the Saudi city of Jizan on Wednesday.

But the International Committee of the Red Cross said the strike hit a bus filled with children in the Huthi stronghold of Saada, causing dozens of casualties.

“A hospital supported by our team in Yemen received the bodies of 29 children under the age of 15 and 48 wounded, including 30 children,” the ICRC said on Twitter.

A spokesman for the Red Cross in Sanaa told AFP the toll was not final as casualties from the attack were taken to several hospitals.

“Under international humanitarian law, civilians must be protected during conflict,” the ICRC said as alarm grew among international aid agencies.

Geert Cappelaere, the UN Children’s Fund regional director in the Middle East and North Africa, said all the children on the bus were “reportedly under the age of 15”.

“Does the world really need more innocent children’s lives to stop the cruel war on children in Yemen?”, he added.

Watch this video and share it to the world:
This child was happy with his new #UNICEF BAG, but #Saudi led coalition targeted his school bus today and killed\injured dozens of his classmates in a local market in Dahian area #Saada #Yemen.#Stop_killing_Yemeni_Children. pic.twitter.com/mzCfFlHsBN

The U.S.-backed, Saudi-led coalition in Yemen just bombed a bus filled with children.

Many of the dead and wounded are under the age of 10, @ICRC says. pic.twitter.com/sJAGU2Tho4

Following an attack this morning on a bus driving children in Dahyan Market, northern Sa’ada, @ICRC_yemen- supported hospital has received dozens of dead and wounded. Under international humanitarian law, civilians must be protected during conflict. pic.twitter.com/x39NVB8G4p

The coalition, which also includes the United Arab Emirates, intervened in 2015 to try to restore the internationally recognised government after the rebels drove it out of the capital Sanaa.

Saudi Arabia shot down a missile fired by the Huthis on Wednesday, with debris killing a Yemeni man and wounding 11 others, the coalition said.

The missile was fired from the rebel-held Yemeni province of Amran towards Jizan, the coalition said.

“The coalition will take all necessary measures against the terrorist, criminal acts of the Huthi militia, such as recruiting child soldiers, throwing them in battlefields and using them as tools,” coalition spokesman Turki al-Maliki said, referring to Thursday’s attack.

The Huthis have in recent months ramped up missile attacks against Saudi Arabia, which Riyadh usually says it intercepts.

Wednesday’s attack brings the tally to 165 rebel missiles launched since 2015, according to the coalition, which that year joined the Yemeni government’s fight against Huthi rebels. 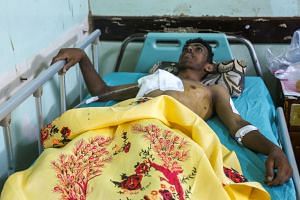 On Aug 2, attacks on a hospital and a fish market in the strategic rebel-held port city of Hodeida killed at least 55 civilians and wounded 170, according to the ICRC.

The coalition denied responsibility for those attacks.

The war in the impoverished country has left nearly 10,000 people dead and unleashed what the UN describes as the world’s worst humanitarian crisis.

The United Nations envoy to Yemen, Martin Griffiths, told the Security Council last week that “a political solution” to end the war in Yemen was “available” and that the warring sides would be invited to talks on September 6 in Geneva.

UN-brokered negotiations on Yemen broke down in 2016 amid demands for a rebel withdrawal from key cities and power-sharing with the Saudi-backed government.