SANAA (AFP) - Yemeni Ahmed Houbeichi is not acting out some childhood fantasy when he peers down on the street below from his tree-house. War and poverty have forced him to seek out such a lofty shelter.

Wearing a red shirt, white turban, and a loincloth around his hips, the 29-year-old recounted how he lost everything, and how his country's dragging war has left him homeless and destitute.

Just a few months ago, he ran a small grocery store, "but the prices went up and the debts accumulated", he told AFP.

He would sell items to customers on credit, but they could not pay him back as the cost of living increased when the local currency depreciated amid a collapsing economy.

Indebted, bankrupt and unable to pay the rent for his shop where he also lived, Mr Houbeichi found himself without a roof over his head in the Yemeni capital, Sanaa.

A four-year war between the Iran-backed Houthi rebels and the government, which is backed by a Saudi-led military coalition, has resulted in severe food shortages in a country already considered the poorest in the Arab world.

"I was late on the rent by only one month, which made the owner angry, so he asked me to leave," Mr Houbeichi said.

"He kicked me out. He threw my stuff onto the street. I felt ashamed, everybody was watching me as if I was an insane person."

It was then he hit on the idea of living in a weeping fig growing on the busy Street 30 in rebel-held Sanaa. 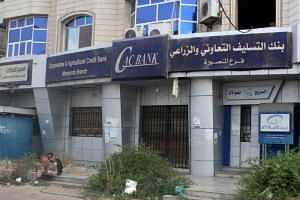 Protests over Yemen's economic malaise spread to other southern cities

His new home among the leaves has a door made of left-over wood from his old shop, while sheets and blankets draped between the branches provide both a makeshift roof and a soft platform on which to perch.

There are a couple of pillows, and some bags hold his few possessions. And he easily clambers up and down.

"It's better than being on the street, and no one comes to you asking for rent," said Mr Houbeichi wryly.

A small solar panel provides some electricity, and the little money he makes monitoring children playing at a foosball table is just enough for food.

"There is no work. I hardly earn any money from the games centre, and work is going to get worse because school started and the students returned to class," he said.

"It just enough for food, for one meal a day."

More than 22 million Yemenis - three quarters of the population - are in need of food aid.

According to the International Monetary Fund (IMF), Yemen's economy is expected to contract by 2.6 per cent in 2018, while inflation has been projected at 42 per cent - inevitably leading to higher unemployment rates.

Mr Houbeichi's struggle is not uncommon as the war has pushed millions to the brink of famine.

Mr Jalal Qasim, 45, teaches Arabic at a school in the southwestern city of Taez by day and sells gasoline on the black market by night.

"It's a very distressing situation," he told AFP, adding a teacher's salary "isn't enough for his personal expenses, let alone his family expenses, like rent".

Nearly 10,000 people have been killed and more than 56,000 injured since 2015, resulting in what the UN has called the worst humanitarian crisis.