MANBIJ, Syria (AFP) - Syrian forces have deployed around the city of Manbij at the request of the Kurds, but Abu Azeez Jaber still fears a US military withdrawal will see Turkish troops enter.

"People are terrified first of the Americans withdrawing, and second of the Turks entering," the 48-year-old cook said.

Since 2016, the strategic northern city on the Turkish border has been controlled by an alliance of Kurdish and Arab fighters backed by the US-led coalition.

On Friday, Syria's army announced it had sent troops to the region, after Kurdish forces said they had requested the regime's help.

The Syrian Observatory for Human Rights, a Britain-based war monitor, said around 300 government forces were sent to the area around the Arab-majority city.

"We haven't seen the Syrian army in the city, but we're hearing it will enter," Jaber added.

A local Manbij official on Friday, however, told AFP that pro-Damascus forces would not enter the actual city of Manbij under a deal brokered by regime ally Russia.

Instead, their deployment creates a buffer to separate the Turkish army and its proxies from the Kurds and their Arab allies, after repeated threats by Turkey's President Recep Tayyip Erdogan to march on the city.

On Saturday (Dec 29), an AFP correspondent saw no signs of any Syrian troops inside the city.

But local forces were on high alert, and carefully inspected the identity papers and vehicles of all those entering Manbij.

On its outskirts, a US armoured vehicle led a coalition patrol of four white trucks.

More coalition vehicles were also parked outside a US base inside Manbij. 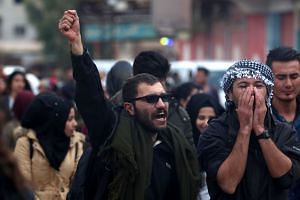 Syria's Kurds, abandoned by US, ask Assad government for protection

Trump defends pullout from Syria while visiting troops in Iraq

"Some people are preparing to leave, while others are holed up at home," he said, dressed in a brown jacket, burn scars on his face.

"We have no idea what will happen to us," he added. "Every day, we hear conflicting reports."

Backed by the US-led coalition, Kurdish fighters have spearheaded the fight against the Islamic State in Iraq and Syria (ISIS) group in Syria, but Ankara views them as a "terrorist" group.

Turkey has previously led two military campaigns inside Syria, most recently seizing the northwestern enclave of Afrin from Kurdish forces in March.

Earlier this week, Turkey said it had sent reinforcements to the border with Syria.

Mohammad said he and fellow Manbij residents had been caught in the crosshairs.

"All we want is peace and safety."

"I personally don't care who controls this city," the young man added.

"What I care about is being able to go out to work in the morning and return home at night without being bothered by anyone."

Manbij has seen different forces come and go since Syria's civil war started in 2011 with the brutal repression of anti-government protests.

The Kurdish-led Syrian Democratic Forces (SDF) expelled the extremists from Manbij in 2016 with backing from the US-led coalition.

On Saturday, dozens gathered in the city centre before heading to a protest against Ankara near the demarcation line separating pro-Turkey fighters and the SDF.

Among them, 33-year-old Osama al-Rabee said he was demonstrating against "Erdogan's daily, provocative threats".

He said he would rather see the Damascus regime return to Manbij than Turkish troops invade.

"For us, Turkey is an occupier, and we'd definitely prefer the Syrian government," he said.

"Syria is still a nation for everybody, and we the Syrian people are still one."