The attacks constituted one of the deadliest days of violence against Christians in Egypt in decades and presented a challenge to the authority of the country's leader, President Abdel Fattah al-Sisi, who promptly declared a three-month state of emergency.

Security is the central promise of al-Sissi, a strongman leader who returned on Friday from a triumphant visit to the United States, where President Donald Trump hailed him as a bulwark against Islamist violence.

Trump made it clear that he was willing to overlook the record of mass detention, torture and extrajudicial killings during al-Sissi's rule in favour of his ability to combat the Islamic State in Iraq and Syria (ISIS) and defend minority Christians.

On Sunday, al-Sissi found himself back on the defensive, deploying troops to protect churches across the country weeks before a planned visit by Pope Francis. Al-Sissi rushed to assure minority Christians, who have traditionally been among his most vocal supporters and now fear that he cannot protect them against extremists. 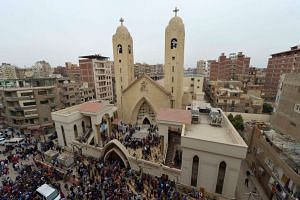 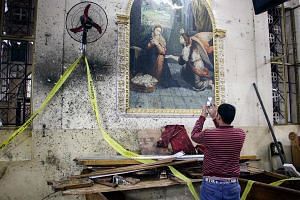 Church attacks: Pressed in Iraq and Syria, ISIS lashes out in Egypt

Chaos and carnage at Egypt churches

"I won't say those who fell are Christian or Muslim," al-Sissi said in a speech shown on state television on Sunday night. "I will say that they're Egyptian."

One attack on Sunday struck at St. Mark's Cathedral, the seat of the Coptic Church in Alexandria, where the bomber blew himself up at the church gates as the Coptic patriarch, Pope Tawadros II, led a Palm Sunday service inside.

The other struck in the Nile Delta city of Tanta, where the attacker slipped past security to the front pews of the church and blew himself up, turning a religious celebration of joy into a ghastly scene of bloodshed and death.

The ISIS, which claimed responsibility for the attacks through its Aamaq news agency, signalled in December its intention to step up attacks on Christians when a suicide bombing at a major Cairo church killed at least 28 people.

In February, hundreds of Christians fled their homes in north Sinai after a concerted campaign of assassination and intimidation in the area.

Although al-Sissi had already stepped up security at churches, Sunday's bloodshed underscores the difficulty of stopping suicide attacks. More starkly, it highlighted the failure of Egypt's powerful intelligence agencies to anticipate a coordinated wave of devastating attacks.

The explosion in Tanta, north of Cairo, occurred at St. George's Cathedral, where authorities had already sealed the main door to prevent attacks. The bomber managed to slip past security measures, including a metal detector, at one of the side doors, and blew himself up near the altar. At least 27 people were killed and 78 others injured, officials said.

Children, their parents and deacons - lay Christians who help with the service - accounted for many of the dead.

Hours later, victims' relatives stood silently outside the city morgue, waiting to identify and collect the remains of their loved ones. Rev. Daniel, a priest who had been leading the Mass, was still wearing his bloodstained white vestments. The priest said he had not been harmed in the attack, but he lost his son who was to get married later this year.

"What can I say? Thank God," he said in a cracking voice.

Next to the priest, a young woman sat on the sidewalk, sobbing as a group of women tried to comfort her. "God, what did he do to deserve this?" she asked, bemoaning the loss of her own loved one.

The second attack occurred just over two hours later in the coastal city of Alexandria, where a suicide bomber tried to enter St. Mark's Cathedral.

Surveillance footage, later aired on a private Egyptian television channel, showed a man wearing a bulky jacket being directed into a metal detector at the church gates, where he paused to be searched by a police officer. A moment later, a giant blast rang out.

At least 17 people were killed, including a district police chief and a police officer, and an additional 48 were wounded, according to the Health Ministry.

Pope Tawadros, who is due to meet with Pope Francis during his visit to Egypt at the end of this month, was not injured in the blast. He later issued a statement saying that "these acts will not harm the unity and cohesion of the people."

Christians make up about 10 per cent of Egypt's 90 million people, who are mostly Sunni Muslim, and have long complained of discrimination and sporadic violence at the hands of extremists. Christian leaders were vocal supporters of al-Sissi after he came to power in 2013 when the military ousted the elected president, Mohammed Morsi of the Muslim Brotherhood.

Many Christians see al-Sissi as their defender, but Sunday's events underscored how difficult it is for him to deliver on that promise, and raised pressing questions about security arrangements for Pope Francis' visit on April 28-29.

As forensics specialists combed through bloodstained wreckage at the site of the two church bombings, security officials found and defused explosive devices at other locations in Alexandria and Tanta, the state media reported. Two devices were found at the Sidi Abdel Rahim Mosque in Tanta, home to one of the most famous Sufi Muslim shrines in the city, and another was found at the Collège St. Marc, an all-boys school in downtown Alexandria.

Hours later, al-Sissi convened a meeting of the National Defence Council, which includes the prime minister and commanders of the Egyptian armed forces, in response to the bombings. He then declared a three-month state of emergency, though it was not immediately clear what extra powers he required, given that his government enjoys largely unfettered powers, has already imprisoned or exiled thousands of political opponents and oversees a Parliament that is dominated by his supporters.

In his televised speech, al-Sissi indicated that media coverage of attacks that embarrass his authority could be restricted. "The media discourse has to be responsible," he said. "It's not acceptable to have the incident aired repeatedly on television stations all day."

Egyptians are used to such moves. The country was officially under a state of emergency for all of Hosni Mubarak's 30-year rule, and again for three months in 2013.

When Pope Francis arrives in Egypt, he will find a country where the ISIS is intent on driving a wedge between Islam and Christianity. The pontiff offered his condolences to the Copts and all Egyptians, and in his statement from Rome he referred to the Coptic patriarch as his "brother." The pope's scheduled visit to

Egypt has been billed as the latest step in a long-running effort to forge stronger ties between the Roman Catholic Church and Muslim leaders. Relations became strained in 2011 when Pope Francis' predecessor, Pope Benedict XVI, denounced what he called "a strategy of violence that has Christians as a target," after a bombing at a church in Alexandria killed at least 23 people. F

Pope Francis has sought to rebuild ties with Muslim clerics since becoming pope in 2013. And last year he welcomed to the Vatican Sheikh Ahmed el-Tayeb, the grand imam of Al-Azhar, a 1,000-year-old mosque and university that is revered by Sunni Muslims.