BEIRUT (AFP) - Now the Islamic State in Iraq and Syria (ISIS) group's "caliphate" has fallen, the hard-won limited autonomy of Syria's Kurds will be left in peril if their key US ally goes ahead with its announced pullout.

On Saturday (March 23), the Kurdish-led Syrian Democratic Forces announced the end of the proto-state that the Sunni Arab extremist group declared across large parts of Syria and neighbouring Iraq in 2014.

The Kurds have largely stayed out of Syria's eight-year civil war, instead building their own institutions in a third of the country under their control.

But a planned US military pullout has left them exposed to an attack by Turkey and in need of protection from Damascus, in a massive blow to their dreams of self-rule.

"The Kurds have been caught between a Syrian rock and a Turkish hard place," Syria expert Fabrice Balanche said.

Kurdish fighters have spearheaded the fight against ISIS since late 2014, but neighbouring Turkey views them as "terrorists".

The presence of American troops in areas held by Kurdish-led Syrian Democratic Forces (SDF) had acted as a shield against any Turkish offensive. 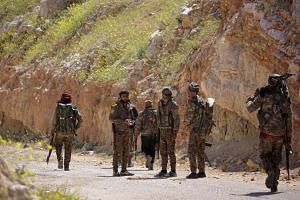 But US President Donald Trump in December shocked Washington's allies by announcing a full withdrawal of all 2,000 US troops from Syria as ISIS had been "beaten".

"The Kurds are facing an uncertain future. The most urgent threat appears to be from Turkey," analyst Mutlu Civiroglu said.

After his announcement, Mr Trump attempted to ease tensions by speaking of a 30-kilometre "safe zone" on the Syrian side of the border.

Turkish President Recep Tayyip Erdogan has said his country would establish the "security zone" itself if it took too long to implement.

The Kurds have rejected any Turkish implementation, especially since any such buffer would include their major cities.

They are demanding instead the deployment of an international observer force.

"Kobane, Tal Abyad, Darbasiya, Qamishli, Dehik, Derbassiye - most of the Kurdish cities are on the border line," Mr Civiroglu said.

Turkey and its Syrian rebel proxies have led two previous offensives inside Syria, most recently seizing the northwestern enclave of Afrin from the Kurds last year.

Syria's civil war has killed more than 370,000 people and displaced millions since it started in 2011 with the brutal repression of anti-government protests.

It has since spiralled into a complex conflict, with rebel backer Turkey and regime ally Russia emerging as key power brokers.

Beyond American approval, Mr Civiroglu said Turkey would likely need a green light from Russia before any Turkish offensive in Syria.

"Russia's position is going to be very important, because Russia has a strong power over Turkey," he said.

President Bashar al-Assad's regime now controls two-thirds of Syria thanks to Russian military backing since 2015, and its seems determined to also return to oil-rich northeastern Syria.

To protect themselves, the Kurds have dispatched delegations to Washington and Moscow.

And in ongoing talks, they have scrambled to mend ties with Damascus.

After decades of marginalisation, the Kurds have developed their own political system in north-east Syria - holding elections, collecting taxes and running schools teaching the Kurdish language.

"In a war-torn country, the Kurdish system is working fine," Mr Civiroglu said.

"The Kurds want this to be recognised."

They want "Kurdish education to be offered officially", he said, after decades of an effective ban on their mother tongue.

But talks so far have failed to bear fruit, and Mr Balanche warns the Kurds are in a weak position.

"The regime is demanding an unconditional surrender. Damascus does not want to let them retain any autonomy," he said.

Syrian Defence Minister Ali Abdullah Ayoub said on Monday that the government would recapture all areas held by the SDF "in one of two ways: a reconciliation agreement or... by force".

Although the end of the ISIS "caliphate" has been declared, ISIS is still present in eastern Syria's vast Badia desert.

The US Defence Department has warned that without sustained pressure on the Islamists, they could resurface in Syria within months.

In the end, the future of the Kurds mainly depends on the United States, says analyst Nicholas Heras of the Centre for a New American Security.

"Every other actor in Syria cannot make a move until there is greater clarity on what the United States ultimately decides to do," he said.

And after any troop pullout, the United States could still stay on with a paramilitary force, he added.

"The best hope for the SDF is for the Americans and the coalition to stick it out in Syria for the long haul."

The White House has said that around 200 American "peace-keeping" soldiers would remain in northern Syria indefinitely.

Acting Pentagon chief Patrick Shanahan said he would be discussing with Nato partners the potential to establish an "observer force" in the area.