BEIRUT (AFP) - Internet cafes closed down, travel bans and new checkpoints: residents say the Islamic State in Iraq and Syria (ISIS) is trying to tighten its grip on power in Raqqa as US-backed forces near the terror group's Syrian bastion.

A Kurdish-Arab alliance called the Syrian Democratic Forces (SDF) began an operation to recapture the northern city on November 5.

Since then, residents say ISIS has tried to seal its stronghold off from the outside world, imposing a media blackout on the city's population of more than 300,000.

The flow of information into and out of Raqqa had already been restricted since January 2014, when ISIS seized the city from rebels who had captured it from regime forces in March 2013.

Since the Islamist group took over the provincial capital, only a handful of outsiders have been able to maintain contact with Raqqa residents.

They include Britain-based monitor the Syrian Observatory for Human Rights and activist group Raqqa is Being Slaughtered Silently (RBSS).

RBSS formed secretly in April 2014 to show the world what was happening inside the city, and has documented life there despite a terrifying backlash from ISIS, which has murdered its activists in Raqqa and even in Turkey. 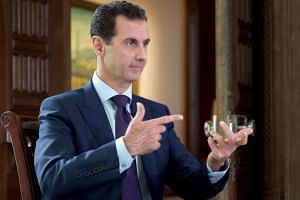 Syria must wait to see if Trump lives up to promise of jointly fighting against ISIS: Assad

Through RBSS, Agence France-Presse made contact with several people still inside Raqqa, who spoke under pseudonyms and described an atmosphere of growing paranoia among the city's terrorist rulers.

Musa, 31, said ISIS was carefully controlling access to news on the US-backed campaign to oust the group from Raqqa.

"Because of the heavy restrictions imposed by Daesh on the Internet and satellite dishes, it's very difficult to find out what's happening in the battle for Raqqa," Musa said, using an Arabic name for ISIS.

"We rely on what we're told by people who do manage to follow the news online - but that is very difficult to do, and very dangerous."

It is risky to even discuss the battle, he said.

ISIS only allows "rumours that they are advancing and inflicting losses on the other side, who will fail to enter Raqqa, as they put it", said Musa.

Any discussion of ISIS losses could result in arrest and even execution by the terrorists, he said.

ISIS has long restricted access to the Internet in territory under its control, banning private routers and allowing only a handful of Internet cafes to function under close surveillance.

"I go online now and then and surf on certain pages - but very, very carefully because of the restrictions Daesh puts on Internet cafes," he said.

Meanwhile, ISIS produces a steady stream of victorious propaganda, saying "they are killing and blowing up the Kurds".

ISIS has imposed an extreme interpretation of Islam on Raqqa, executing those who break the group's rules.

The terrorists' de facto Syrian capital has been the scene of some of the group's most horrifying acts of violence, as well as a hub for foreign fighters it has attracted from around the world.

Residents have long been prevented from leaving Raqqa without ISIS permission, but in recent months it has become impossible, said Abu Mohamed, another activist with RBSS who spoke from outside the city.

"But if their plans are discovered, they are arrested and their money is confiscated, and the smugglers trying to help them will be executed," he said.

He described two families who recently tried to escape with their children, terrified of intensifying US-led coalition air strikes and the Islamists' growing paranoia, but were captured shortly after leaving.

The men were imprisoned and the families' money and identity documents were confiscated, he said.

Analysts say the fight for Raqqa is likely to be long and complicated.

The SDF says it will involve two phases: the first to besiege the city, and the second to enter and recapture it.

But tensions over which forces will lead the final battle and the risk of civilian casualties are likely to hinder progress.

Musa said he was waiting impatiently to be rid of ISIS' "occupation".

"Liberation is the dream of all the free people of Raqqa," he said.