TEHERAN (AFP, REUTERS, WASHINGTON POST) - US President Donald Trump was expected on Friday (Oct 13) to declare a more aggressive strategy on a nuclear deal signed on July 14, 2015, by Iran and major world powers.

Struck in Vienna by the five permanent members of the UN Security Council - Britain, China, France, Russia and the United States - plus Germany, the deal established controls to prevent Teheran from developing an atomic bomb.

It was a breakthrough that ended a 12-year standoff with the West over Iran's disputed nuclear programme, and led to a partial lifting of international sanctions on Teheran.

But in a White House speech later on Friday, Mr Trump was expected to declare the agreement no longer in the US national interest.

Here's what you need to know about the deal and why Mr Trump wants "trigger points" for re-imposition of sanctions:

By November, an interim deal was agreed upon, freezing some of Iran's nuclear activities in exchange for minor sanctions relief.

The deal was finalised in April 2015 and signed in Vienna on July 14 that year, ending 12 years of crisis and 21 months of negotiations.

The accord brings to a minimum of one year, for at least 10 years, the "breakout time" that Iran needs to produce enough fissile material to make an atom bomb.

Teheran agreed to slash the number of uranium centrifuges, which can enrich uranium for nuclear fuel as well as for nuclear weapons, from more than 19,000 to 5,060, maintaining this level for 10 years.

All enrichment was to take place at the Natanz facility only and Iran's pre-deal stockpile of 12 tonnes of low-enriched uranium - enough for several nuclear weapons if further enriched - was to be reduced to 300kg for 15 years.

Only enrichment to low purities was allowed, also for 15 years.

Iran's Arak reactor was to be redesigned so that it does not produce weapons-grade plutonium, the alternative to highly enriched uranium for a nuclear weapon.

The International Atomic Energy Agency (IAEA) was charged with regular inspections of facilities such as uranium mines and centrifuge workshops for up to 25 years.

The agency said in September that Teheran was sticking to the terms of the deal. Its staff had conducted at least 400 inspections of sites in Iran and 25 snap inspections, it said

The deal paved the way for a partial lifting of international sanctions on Iran, opening the door for foreign investors, with French energy giant Total and car-makers PSA and Renault quick to strike deals.

UN embargoes on conventional arms and on ballistic missiles were to be maintained up to 2020 and 2023 respectively.

Mr Trump had railed against the deal struck by his predecessor and vowed to tear it up, deriding it as "the worst deal" and one agreed to out of "weakness".

Mr Trump was expected on Friday to declare the agreement no longer in the US interest, though it would be up to US lawmakers to decide its fate.

But the plan does not envisage Washington pulling out of the Iran deal's Joint Comprehensive Plan of Action or JCPOA. Indeed, "the deal must be strictly enforced, and the IAEA must fully utilise its inspection authorities," according to a fact sheet released by the White House to set the stage for Mr Trump's speech.

In another partial climb-down, Mr Trump was also expected to levy limited sanctions against the Revolutionary Guards, rather than invite retaliation by designating it as a terrorist organisation.

Iranian Parliament Speaker Ali Larijani said on Friday if the United States leaves the Iran nuclear deal, this will be the end of the international agreement.

WHY DOES TRUMP HATE THE DEAL?

He referenced it in a New York Times interview and on stage during the second presidential debate. Mr Trump's chief complaint was that the US forked over a massive sum of money in a "one-sided transaction". 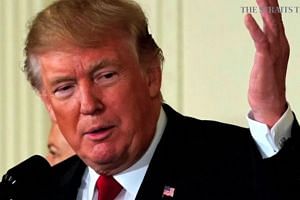 But that's not accurate. The money belonged to Iran, mostly from limited, legal oil sales. It was frozen in banks around the world because of sanctions on its nuclear programme. The release of the money was part of the negotiated deal. And Iran got much less.

The total unfrozen accounts yielded about US$100 billion. The Treasury Department estimated that Iran got roughly half that - and some say it got much less - after debts were paid. Other assets not tied to its nuclear programme are still frozen.

"Iran just test-fired a Ballistic Missile capable of reaching Israel," he wrote. "They are also working with North Korea. Not much of an agreement we have!"

In fact, video footage released by Iran's state media showed a failed missile launch in January - not a live launch. The nuclear deal was limited to the nuclear programme.

The rationale was that it would be better to confront Iran over other contentious issues if it didn't have enough fissile material to build a nuclear bomb. Those issues were always intended to be addressed separately.

Iran, without a nuclear bomb, had more sanctions on it than North Korea, which possesses several.

3. The inspectors have limited monitoring powers: Mr Trump has complained that the International Atomic Energy Agency, the UN organisation responsible for inspecting Iran's facilities, does not have sufficient monitoring powers over the nuclear facilities.

He and other critics say the inspectors have no access to closed military sites where any suspect work might be done in secrecy. Actually, the agreement does make some provision for inspecting military sites.

But in requesting access, the IAEA must show Iran the basis for its concern. Iranian officials have repeatedly said the military sites are off-limits to the IAEA.

4. Some parts of the agreement are not permanent: This was the part of the deal that took the longest to negotiate.

Critics say that when they expire, Iran will be freed to build or acquire nuclear weapons. Some of the limits, such as those on centrifuges and on research and development of more-advanced ones, end in 2025. Others last longer.

In accusing Iran of falling down on the deal's expectations, administration officials cite a phrase in the preamble, in which the signatories "anticipate that full implementation of this JCPOA will positively contribute to regional and international peace and security".

Mr Trump claims Iran is defaulting on its promises by supporting President Bashar al-Assad in Syria, supporting militias in other countries, and developing ballistic missiles for what Iran says is self-defence.

No one disagrees that Iran's activities are a destabilising influence in the region. But the six world powers that negotiated the deal with Iran said at the time it was solely about Iran's nuclear programme.

A primary goal was to ensure that regional tensions did not lead to a nuclear arms race.

HOW HAVE OTHER COUNTRIES REACTED?

China on Friday called on the United States to maintain its commitment to the Iranian nuclear deal. "We believe this deal is important to ensuring the international nuclear non-proliferation regime and regional peace and stability. We hope all parties can continue to preserve and implement this deal," Foreign Ministry spokeswoman Hua Chunying said during a regular press briefing.

Germany said on Thursday Mr Trump's expected move to "de-certify" the international nuclear deal with Iran is driving a wedge between Europe and the United States and bringing Europeans closer to Russia and China.

On Tuesday, British Prime Minister Theresa May called the White House to impress upon it her government's "strong commitment to the deal alongside our European partners".