AL-DHAFRA AIR BASE, ABU DHABI (REUTERS) - After accompanying an Israeli delegation to the UAE for historic normalisation talks, White House adviser Jared Kushner set off on a tour of other Gulf capitals on Tuesday (Sept 1), looking for more Arab support.

Israel and the United Arab Emirates set up a joint committee to cooperate on financial services at the talks in the UAE capital Abu Dhabi. Kushner, President Donald Trump's son-in-law, accompanied the Israeli delegation on Monday on what was billed as the first Israeli commercial flight to the influential Gulf monarchy, which agreed in August to normalise relations.

Israel exchanged embassies with neighbours Egypt and Jordan under peace deals decades ago. But until now, all other Arab states had demanded it first cede more land to the Palestinians.

In remarks reported by the UAE state news agency WAM, Kushner suggested other Arab states could follow quickly. Asked when the next would normalise ties with Israel, he was quoted as saying: "Let's hope it's months."

Kushner later flew to Bahrain and then Saudi Arabia and is expected also to visit Qatar.

While no other Arab country has yet indicated a willingness to follow the UAE, the richest, Saudi Arabia, allowed the El Al charter flight carrying Kushner and the Israelis to use its air space.

In Bahrain, which houses the US naval headquarters for the region, the state news agency reported that during his meeting with Kushner, King Hamad bin Isa Al Khalifa had praised the role the UAE has played in defending Arab and Islamic interests.

In Saudi Arabia, Crown Prince Mohammed bin Salman and Kushner discussed the need for the Palestinians and the Israelis to resume negotiations and reach a lasting peace, state news agency SPA reported.

The UAE, United States and Israel on Monday urged the Palestinians to "re-engage" with the Israelis, according to a joint statement carried by the Emirati state news agency.

The Palestinians have denounced the UAE agreement with Israel, which they say violates a longstanding pan-Arab position that Israel could normalise relations only in return for land.

The UAE says it obtained a major concession from Israel to halt plans to annexe territory on the occupied West Bank. 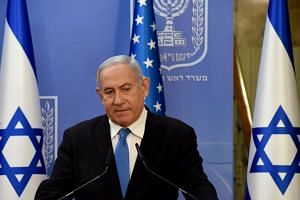 The Gulf Arab states are mainly ruled by Sunni Muslim monarchs who consider their biggest foe to be Shi'ite Iran, and Israel has long held out the promise that their common enemy could bring them together.

In a fiery speech on Tuesday, Iran's supreme leader, Ayatollah Ali Khamenei, said: "The Emiratis will be disgraced forever for this treachery against the Islamic world, Arab nations and Palestine."

"The UAE, along with Israelis and evil Americans like the Jewish member of Trump's family, are working together against the interests of the Islamic world," Khamenei said, referring to Kushner, who is Jewish.

Asked about Khamenei's remarks, UAE Foreign Ministry official Jamal Al-Musharakh told reporters in Abu Dhabi: "The path to peace and prosperity is not paved with incitement and hate speech."

Israeli officials have played up the economic benefits of the UAE deal. Prime Minister Benjamin Netanyahu said representatives of the two countries had signed an agreement on cooperation in financial services.

The state-run Abu Dhabi Investment Office and Invest in Israel, part of Israel's economy ministry, issued a joint statement saying they had agreed to set out a plan to establish formal cooperation.

Amid the historic normalisation talks, Kushner spent a morning meeting UAE military officials at an Abu Dhabi air base that houses US military F-35 jets, advanced stealth aircraft which the Gulf state has long sought to buy despite Israeli objections.

The UAE has said normalisation should remove any hurdle blocking the sale. Netanyahu said on Monday Israel still opposes selling the jets to the UAE.