ANKARA (AFP, REUTERS) - Turkish prime minister Ahmet Davutoglu has said that 11 suspects have been detained over the car bombing in Ankara, while evidence points to the outlawed Kurdistan Workers' Party (PKK) as being behind the attack.

Turkish police had earlier confirmed that they detained four suspects near the Syria border whom they believe are linked to the deadly car bomb attack in the heart of the capital, according to local media.

Police acted on the tip-off that the car that exploded in Ankara had been bought from a dealership in Sanliurfa, state-run Anatolia news agency reported. The four suspects were due to be taken to Ankara, the agency said.

Nobody has claimed responsibility yet for the attack that claimed the lives of at least 36 people - the third on the jittery capital in five months. 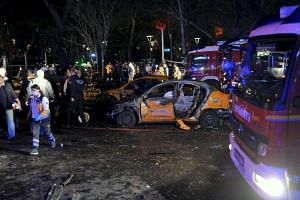 Second bombing in a month in Ankara kills 34, injures 125 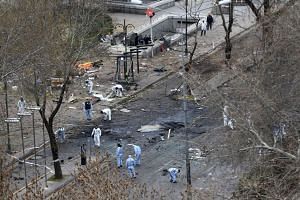 A Turkish official told AFP on Monday that one of the bombers was believed to be a woman with ties to PKK.

A police source told Reuters that her severed hand was found 300 metres from the blast site. Evidence had been obtained that suggested she was born in 1992, was from the eastern city of Kars near the Armenian border, and had joined the militant group in 2013. The second suspect was a male Turkish citizen also with PKK links, a security official said.

Health Minister Mehmet Muezzinoglu gave an overall toll of 37, but said this included at least one attacker and possibly two.