The letter was delivered during a recent meeting in Mexico with senior US officials, and details were disclosed once Trump had received it, said Lopez Obrador, a leftist who won Mexico's July 1 presidential election in a landslide.

In a news conference with Lopez Obrador, Marcelo Ebrard, the president-elect's proposed foreign minister, read a copy of the letter, which states that the incoming administration's aim is to "start a new chapter in the relationship between Mexico and the United States, based on mutual respect."

Lopez Obrador, who takes office on Dec 1, also called for the countries to redouble their efforts to wrap up talks to modernise the 24-year-old North American Free Trade Agreement, which includes Canada.

"Prolonging the uncertainty could stop investment in the medium and long-term, which clearly would challenge economic growth," Lopez Obrador wrote in the letter.

Trump has been antagonistic to Mexico over trade and immigration. Talks to renegotiate Nafta began nearly a year ago after Trump called for the agreement to be renegotiated to better serve US interests.

Talks, which had effectively stalled as Canada and Mexico struggled to accommodate US demands for major changes, will resume on Thursday in Washington. Former World Trade Organization economist Jesus Seade will accompany the Mexican delegation as Lopez Obrador's representative, Ebrard said.

Lopez Obrador singled out migration, development and security as prime areas of potential collaboration in his letter to Trump. 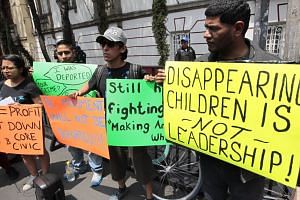 Amid protests, Mike Pompeo and other US officials visit Mexico's next president

He reiterated to Trump his interest in working in depth on the problem of migration, through a development plan that would include Central American countries.

"My government is willing to present to our Congress ... the initiative and budgetary proposal to contribute economic resources and experiences in this joint effort," he wrote.