The Super Lotto winner, who was identified only as A. Campbell, made a memorable appearance last week at the Spanish Court Hotel in Kingston to collect his prize, worth more than 158 million Jamaican dollars (S$1.5 million); but it took him 54 days to muster up the courage to do it, according to Supreme Ventures, which operates the game in the Caribbean.

Mr Campbell told the Jamaica Star that after he won in November, he felt sick for days "because I was thinking so much".

But when he showed up on Feb 5 to pick up his cheque, he said he was feeling better.

"I'm kind of OK," he told reporters, according to the newspaper. "I'm just a bit numb, a little bit."

Mr Campbell told the Jamaica Star that he was initially overwhelmed.

"I looked at my ticket and ran into my bathroom and said 'I won! I won!'" he told the newspaper last month.

"From the day I found out that I won, I've been sick. My head hurt me for three days because I was thinking so much - if what I've been longing for really come true. I had a bellyache for two weeks. Sometimes I feel so much pain I forgot that I won."

This is that happiness only a #SuperMillionaire knows about😎 pic.twitter.com/xjRxtModuR

Mr Campbell told the newspaper that he knew the deadline to cash out was coming up later in February, but "I just wanted to get myself together before I came forward".

And once he did, he made quite the impression.

Supreme Ventures tweeted out photos last week showing him - in costume - collecting his million-dollar prize, then posing with his giant cheque.

He appeared to be playing homage to the 1996 horror film "Scream," which starred Neve Campbell.

It may have taken Mr Campbell awhile to collect the prize, but at least it gave him time to think about how he wants to spend it. 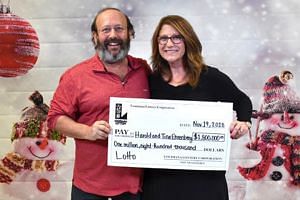 US couple win US$1.8 million after finding forgotten lottery ticket

He told the Jamaica Star that he plans to buy "a nice house".

"I like to handle money," he said. "I don't beg, I don't borrow. So I'm looking at things that can turn over the money. I have a little business, so I plan to make it bigger, buy an apartment. I love to have money."

Last year in Jamaica, a woman who won the Super Lotto jackpot wore a mask of a winking smiley-face emoji when she went to collect her prize.

"Unfortunately, Jamaica is not like other markets," Ms Clarke-Cooper told the newspaper about the lottery.

"In other markets, they don't necessarily do it, but here I think they opt to do it to keep themselves safe. We are not going to tell them not to do that, because their safety is of paramount importance to us as well."

The trend has emerged in other countries as well.

In China, winners have dressed up as pandas, babies and robots to protect their identities. In the United States, several years ago, a California man covered his face with the enormous cheque, and last year, a woman in New Hampshire fought in court to keep her identity a secret - and won.