NEW YORK (BLOOMBERG) - Plastic is a hot topic in Davos this week and more big-name companies are stepping up commitments to reducing plastic waste - playing catch-up to other industry leaders.

Fast-food chicken chain KFC said on Thursday (Jan 24) that all plastic-based, consumer-facing packaging will be recoverable or reusable by 2025. Walmart Canada announced plans on Wednesday that include reducing plastic bag use by 2025 that will take about one billion bags out of circulation, and replacing single-use plastic straws with paper alternatives by 2020.

"This commitment represents a public acknowledgment of the obligation we have to address these serious issues" of environmental sustainability, KFC chief executive officer Tony Lowings said in a statement.

Waste from plastic has become a flashpoint with environmentalists and consumers, and companies are reluctant to be seen as falling behind.

Oreo maker Mondelez International and Nestle are among food giants that announced similar sustainability goals last year. KFC parent Yum! Brands previously said it will source all fibre-based packaging from certified or recycled sources by 2020, as a supporting partner of the NextGen Consortium.

Walmart Canada, with 411 stores and more than 85,000 employees, announced additional goals, including a 2025 target to have 100 per cent recyclable, reusable or compostable packaging for its own private brand products as part of a global commitment launched by The Ellen MacArthur Foundation in 2018.

"This is an aspirational goal when you think about it," said Conrad MacKerron, senior vice-president of As You Sow, a non-profit group focused on shareholder advocacy. Still, publicly committing to such a target helps investors and consumers hold companies accountable, MacKerron said.

Nestle and PepsiCo are among some 25 consumer companies taking part in a programme announced on Thursday at the World Economic Forum in Davos that provides products in reusable packaging that can be returned for a refund.

The "Loop" initiative, which refers to a theoretical circular economy where nothing is wasted, is led by New Jersey-based recycling company Terracycle. 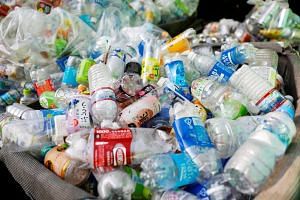 KFC also said on Thursday it made good on a promise that by the end of last year all chicken purchased would be raised without antibiotics important to human medicine. That initiative got under way in 2017 after pressure from shareholders.

Other fast-food chains began phasing out chicken with antibiotics years earlier. Chick-fil-A began in 2014, Subway eliminated it in 2016 and Taco Bell, also owned by Yum! Brands, reached the goal in 2017.

Still, KFC helped tip the chicken industry in an important way, according to Lena Brook, director of food campaigns at the National Resources Defense Council.

"KFC proved that even in perhaps a more complex reality that change is possible if you commit to it," Brook said.