BAGHDAD (AFP) - Iraqi forces discovered a mass grave on Sunday (June 5)after retaking an area from the Islamic State of Iraq and Syria (ISIS) group near Fallujah, where the jihadists are using thousands of civilians as human shields.

Growing numbers of families reaching camps south of Fallujah told horrific accounts of how ISIS shot at them as they fled, but there was still no escape for the tens of thousands believed trapped in the city centre.

In Saqlawiya, northwest of Fallujah, Iraqi forces found a burial site thought to contain the bodies of around 400 people, most of them soldiers executed by ISIS in 2014 and 2015. 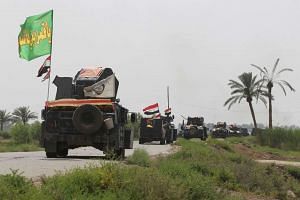 "The security forces of the federal police, the army and the Hashed al-Shaabi found a mass grave in the Shuhada neighbourhood during a mine clearing operation," a police colonel said.

He said most of the victims, whose remains were being transferred for identification, appeared to have been shot in the head.

"The mass grave also includes civilians executed by Daesh (ISIS) on various charges such as spying or breaking the organisation's rules," said Rajeh Barakat, a member of the provincial council of Anbar, where Fallujah is located.

Iraqi forces launched a vast operation on May 22 and 23 to retake Fallujah, which lies only 50 kilometres  west of Baghdad and is one of the jihadists' most emblematic bastions.

The first phase of the operation was aimed at sealing the siege on the city by cutting the jihadist group's supply lines in outlying areas, including in Saqlawiya.

A week ago, elite troops launched a second phase aimed at breaking through into Fallujah itself, a dense city where US soldiers in 2004 suffered some of their worst losses since the Vietnam War.

But the Iraqi forces have been moving slowly, only making some forays into some southern neighbourhoods.

The Baghdad government said concern for the fate of an estimated 50,000 civilians still inside the city was slowing the operation.

"The operation to liberate Fallujah could have been completed in days but we put the safety of civilians first," Prime Minister Haider al-Abadi's spokesman Saad al-Hadithi said.

Out of the approximately 18,000 people who have reached displacement camps south of Fallujah since the offensive began two weeks ago, only a handful lived in the city.

The Norwegian Refugee Council said on Sunday that those who arrived at its camps in Amriyat al-Fallujah, to the south, told of how IS would open fire on them to punish them for fleeing.

"An unidentified number of civilians have been shot and killed trying to cross the river," it said in a statement.

"This is the worst that we feared would happen to innocent men, women and children who have had to leave everything behind in order to save their lives," the statement quoted NRC country director Nasr Muflahi as saying.

The premier's spokesman said that the government would also investigate claims of abuses committed against the civilian population by Iraqi forces in the course of the operation.

He said Abadi had ordered the creation of a human rights committee to examine "any violation to the instructions on the protection of civilians".

Grand Ayatollah Ali al-Sistani, the most revered Shiite cleric in Iraq, has issued guidelines intended as a form of code of conduct for forces fighting IS and aimed at curbing abuses.

Officials including Parliament Speaker Salim al-Juburi have expressed concern over reports of abuses committed by the forces involved in the operation to recapture Fallujah.

Juburi spoke on Thursday of "information indicating that some violations were carried out by some members of the federal police and some volunteers against civilians".

The Hashed al-Shaabi taking part in the Fallujah operation is an umbrella organisation that includes Sunni tribal fighters but is dominated by powerful Tehran-backed Shiite militias.

It is nominally under Abadi's authority but some of its most powerful groups answer directly to Iran.

Those groups have been repeatedly accused of fuelling sectarianism, and their involvement in the Fallujah battle was seen as potentially explosive.

Their role so far has been confined to the initial phase of shaping operations, but their top military commander said on Sunday they would move into the city if progress was too slow.

"We're partners in the liberation, our mission is not yet done," Abu Mahdi al-Mohandis said at a press conference.

"We are still in the area and we'll continue to support (them) if the liberation happens quickly. If they are not able, we'll enter with them," he said.