SINGAPORE - At first glance, the summary of the latest United Nations scientific report on climate change reads like a dystopian novel.

The report, released on Wednesday (Sept 25), warned of seas rising more quickly than previously thought, due to accelerating rates of ice melt.

And as oceans turn from friend to foe, communities and biodiversity all around the globe are likely to be affected, said the Intergovernmental Panel on Climate Change's (IPCC) special report on oceans and the cryosphere - the frozen parts of the planet.

Freshwater supplies could dry up, seafood could swim away, and ecosystems like coral reefs - underwater gardens of the sea - could turn white in the face of marine heatwaves.

But amid all the gloom, there is a silver lining.

As IPCC chair Hoesung Lee put it: "If we reduce emissions sharply, consequences for people and their livelihoods will still be challenging, but potentially more manageable for those who are most vulnerable. We increase our ability to build resilience and there will be more benefits for sustainable development."

More than 100 scientists from 36 nations compiled the report based on nearly 7,000 publications, with the goal of summarising the latest science for policymakers around the globe.

The 43-page summary released on Wednesday was approved after a five-day review session in Monaco involving scientists and diplomats.

The Straits Times highlights some of the key findings from the report.

- The loss of land ice, such as ice sheets and glaciers, contributes to sea level rise. Just like how adding ice cubes to a glass of water raises water levels, melting land ice would also substantially contribute to sea-level rise.

- The loss of snow cover and sea ice in the Arctic could affect the planet's albedo, or reflectivity. The whiteness of the snow-covered poles makes them a lot more reflective compared with earth's other surfaces, such as the ocean or forest covers. But with warming causing earth's icy "shield" to melt, this could result in an increase in the amount of heat absorbed by the planet, exacerbating the warming trend.

- Permafrost in the Arctic and other parts of the northern hemisphere contain 1,460 - 1,600 gigatonnes of organic carbon, almost twice the carbon in the atmosphere. If permafrost melts and releases this stored carbon into the atmosphere, it will reinforce the warming trend.

- The shrinking cryosphere in the Arctic and high mountain areas has led to negative impacts on food security, water resources, water quality, livelihoods, health and well-being, infrastructure, transportation, tourism and recreation, as well as culture of human societies, particularly for Indigenous peoples. 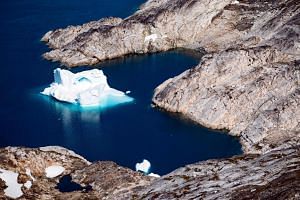 What does the latest IPCC climate report say and why does it matter?

2. The world's oceans are changing. They are warming quicker than before, with marine heatwaves doubling in frequency and increasing in intensity.

The ocean surface is also becoming more becoming more acidic as more carbon dioxide is absorbed. It is also losing oxygen, from the surface to 1,000m depth.

- The changing oceans, in terms of temperature, acidity and oxygen content, could affect the activity of marine organisms and where they are found.

"(The changes have) resulted in shifts in species composition, abundance and biomass production of ecosystems, from the equator to the poles. In some marine ecosystems, species are impacted by both the effects of fishing and climate changes," noted the IPCC report.

- This could also threaten marine ecosystems, such as coral reefs.

Prolonged periods of high environmental temperature and dehydration of the organisms pose high risk to rocky shore ecosystems, it added.

Dr Hans-Otto Pörtner, co-chair for IPCC Working Group II, said during a press conference on the latest report on Wednesday (Sept 25): “An ocean that is warmer, more acidified and losing oxygen has implications for marine life, its distribution, and productivity.

"Changes in the ocean pose shifts in the distribution of fish populations. This has reduced the global catch potential in the fisheries.”

He added that communities that depend highly on seafood may face risks to nutritional health and food security.

“In addition to cutting greenhouse gas emissions, reducing other pressures such as pollution will further help marine life deal with changes in their environment."

Policy frameworks such as fisheries management and marine protected areas offer opportunities to adapt to changes and minimise risk to livelihoods, while enabling a resilient ocean, he added. 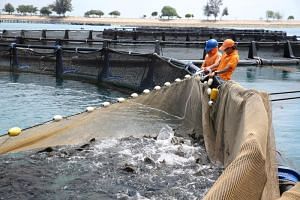 3. Global mean sea level is rising, with acceleration in recent decades due to increasing rates of ice loss from the Greenland and Antarctic ice sheets.

- Other than sea level rise, coastal ecosystems can also be negatively affected by ocean warming, including intensified marine heatwaves, acidification, loss of oxygen and salinity intrusion. These threats often happen in combination with adverse effects from human activities on ocean and land.

- This points to the importance of adaptation. The IPCC report said coastal protection can reduce flood risk by two to three times, but this depends on investments on the order of tens to several hundreds of billions of US dollars per year.

"While such investments are generally cost efficient for densely populated urban areas, rural and poorer areas may be challenged to afford such investments with relative annual costs for some small island states amounting to several percent of GDP," said the report.

But the IPCC noted that even with major adaptation efforts, residual risks and associated losses are projected to occur.