VANCOUVER (BLOOMBERG, AFP) - A Canadian provincial court on Monday (Dec 10) adjourned without deciding the fate of Huawei Technologies Co. Chief Financial Officer Meng Wanzhou after she appeared in a Vancouver court in relation to an extradition case following her arrest at the request of the United States.

Meng was arrested on Dec 1 during a stopover in Vancouver on her way to Mexico as part of a US investigation. The 46-year-old mother of four is accused of guiding a global effort by the Chinese telecom equipment giant to mask violations of sanctions on sales to Iran.

It’ i an unprecedented effort to hold accountable a senior executive who’s considered part of China’s inner circle – the daughter of billionaire Huawei founder Ren Zhengfei.

During Meng's bail hearing, Justice William Ehrcke of the British Columbia Supreme Court voiced doubts that Meng’s husband, Liu Xiaozong, could act as her surety if she were released on bail. On the other hand, the judge also said it’s impossible to guarantee that there would be no flight risk should the court grant her request.

Crown attorney John Gibb-Carsley said the prosecution “always had a concern” about Liu acting as a surety because of his lack of connection to Canada and Vancouver.

Earlier, Meng’s lawyer had said her husband would post bail equal to C$15 million (S$15.38 million) in cash and equity in the couple’s homes in Vancouver to gain her release from jail in Canada while she contests possible extradition to the US. Liu would also ensure she complies with the terms of her confinement imposed by the court, David Martin, Meng’s defence lawyer, told Ehrcke.

The couple own two homes valued at more than C$20 million, according to property records and an affidavit from Meng.

The pledge came on the second day of a bail hearing in the high-profile case that’s transfixed investors on both sides of the Pacific as it stokes US-China trade tensions. Meng followed the proceedings through an interpreter at the back of the Vancouver courtroom. 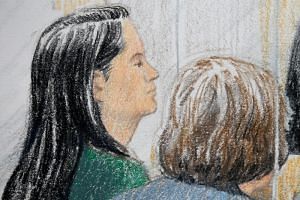 “She is a woman of character and dignity,” Martin told the court. “She would comply with your order.”

In response, Ehrcke asked Martin how Liu could possibly serve as his wife’s “jailer,” particularly if the judge couldn’t order Liu to remain in the country. Martin said he wasn’t aware of Liu’s immigration status in Canada.

Earlier, expert witness Scot Filer testified on behalf of the defence to explain how Meng’s whereabouts could be secured if she were to be released on bail.

Technology by itself would be no guarantee that Meng wouldn’t flee, Filer, chief executive officer of Lions Gate Risk Management Group and a former member of the Royal Canadian Mounted Police, told the court. Using two security officers at a time, as well as a driver, and technology to oversee Meng’s whereabouts on would minimize the flight risk, he said.

“I’m very confident what we will have in place will satisfy the court,” Filer said.  Meng would pay for the security operations as an added layer of assurance she would remain in the country if granted bail, Martin, told the court.

In a sworn 55-page affidavit, Meng said she has been treated in hospital for hypertension since her arrest. "I continue to feel unwell and I am worried about my health deteriorating while I am incarcerated," the affidavit read.

"I wish to remain in Vancouver to contest my extradition and I will contest the allegations at trial in the US if I am ultimately surrendered," she said.

Crown attorney Gibb-Carsley has argued against granting Meng bail because she’s so wealthy that she will easily be able to pay whatever is required and then flee. Since learning of the investigation into her alleged activities, Meng has avoided the US, and other Huawei executives have also stopped travelling there, he added.

Meng’s lawyers have in turn argued their client has no criminal record, cited high-profile character witnesses to vouch for her, and say she has substantive ties that ensure she would remain in Vancouver. They’ve also cited health issues, including daily medication, to argue for her release from a Vancouver-area detention centre.

Meng’s only two valid passports – from China and Hong Kong – have already been confiscated, preventing her from boarding any commercial flights. The only place she could flee to by land is the US, the very country that seeks her extradition, they argue.

The case has upended the relationship between Washington and Beijing as they scramble to avert higher tariffs on US$200 billion of goods that could depress an already slowing Chinese economy – with potentially grave global consequences. The move by the US to reach across borders to arrest a prominent Chinese national comes as US political leaders seek to contain the Asian country’s rapid ascent, while holding it accountable to allegations of intellectual property theft and protectionism.

The hearing in Vancouver is the start of a long legal process in Canada that could end with Meng being sent to the US to stand trial. Even though the North American neighbours have a longstanding treaty governing extradition, it can take months, even years, for a defendant to be handed over, if at all.

Should a judge agree to extradite Meng, she would have multiple chances to appeal the decision.

Huawei believes the Canadian and US legal systems will deliver a fair conclusion, the company said in a statement carried by Chinese state media on Tuesday (Dec 11), after the Canadian court was adjourned.  Huawei Technologies Co Ltd will continue to pay attention to the bail hearing, the company added.

A Chinese vice foreign minister summoned the US and Canadian ambassadors over the weekend, demanding that the US withdraw its arrest warrant and warning Canada that it faces "grave consequences."

Foreign ministry spokesman Lu Kang was critical of Meng's treatment, citing China's state-run Global Times newspaper as reporting that "it seems that the Canadian detention facility is not offering her the necessary health care." "We believe this is inhumane and violates her human rights," Lu said at a regular press briefing.

At a hearing that was adjourned on Friday, Canadian Crown prosecutor John Gibb-Carsley asked for bail to be denied, saying Meng had been accused of "conspiracy to defraud multiple financial institutions" and posed a flight risk.

She is specifically accused of lying to bankers about the use of a covert subsidiary to sell to Iran in breach of sanctions.

If convicted, she faces more than 30 years in prison. The extradition process could take months, even years, if appeals are made in the case.

Meng said she has ties to Vancouver going back 15 years. She and her husband Liu Xiaozong own two homes in the city, and she even had a Canadian permanent residency permit that she has since renounced.

Police were reportedly called to one of the houses, in Vancouver's Dunbar neighborhood where she proposes to stay, about a possible break-in early Sunday.

A decision on extradition could take months or even years, if appeals are made in the case.

Analysts say Meng's arrest - the same day that presidents Donald Trump and Xi Jinping agreed to a 90-day tariffs truce - could be used as a bargaining chip in trade negotiations between the United States and China.

But US Trade Representative Robert Lighthizer rejected suggestions that the case could affect the talks while Canadian Prime Minister Justin Trudeau has said politics played no part in the decision to arrest Meng.

Huawei's affordable smartphones have made strong inroads in the developing world, but the company has faced repeated setbacks in major Western economies over security concerns.

The company faces being shut out of Australia, New Zealand and US 5G rollouts, and British telecom group BT revealed last Wednesday it was removing Huawei equipment from its core cellular network.