LONDON (AFP) - British Prime Minister Theresa May said Monday (March 12) it was highly likely that Russia was responsible for a “reckless and despicable” attack on a former double agent in Britain, an accusation rejected by Moscow as a “provocation”.

In a dramatic escalation of diplomatic tensions over the attack on Sergei Skripal and his daughter on March 4, May said the nerve agent that poisoned them was a military-grade type developed by Russia.

She told parliament that Moscow had previously used this group of nerve agents known as Novichok, had a history of state-sponsored assassinations and viewed defectors such as Skripal as legitimate targets.

“The government has concluded that it is highly likely that Russia was responsible for the act against Sergei and Yulia Skripal,” she told the House of Commons.

Moscow swiftly rejected May’s comments to lawmakers, saying it was “a circus show”.

Her statement was part of “another information and political campaign based on provocation,” said Russian foreign ministry spokeswoman Maria Zakharova in comments carried by news agencies.

The White House offered its support to Britain, calling the attack “an outrage”, but stopped short of referencing any possible Russian involvement.

“The attack was reckless, indiscriminate and irresponsible,” said press secretary Sarah Sanders In London earlier Monday, Foreign Secretary Boris Johnson summoned the Russian ambassador to demand a “full and complete disclosure” of the Novichok programme to the global chemical weapons watchdog, May said. 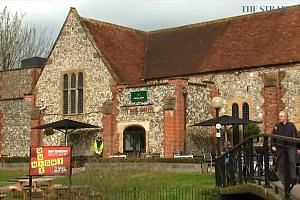 She added the envoy was asked to explain whether the attack on Skripal was a “direct act by the Russian state against our country”, or if the government had “lost control” of the agent and someone else had used it.

“He has requested the Russian government’s response by the end of tomorrow (Tuesday),” the prime minister said.  If there was “no credible response, we will conclude that this action amounts to an unlawful use of force by the Russian State against the UK”, May added.

“And I will come back to this House and set out the full range of measures that we will take in response.”

Skripal was jailed for selling Russian secrets to Britain but moved to this country in a spy swap in 2010, settling in the sleepy city of Salisbury in southwest England.  He and his daughter Yulia, 33, remain in a critical condition after being found unconscious on a bench outside a shopping centre in the city.

The Russian embassy in London had warned Monday that Britain’s failure to dampen speculation about the attempted murder had led to threats against Britain-based Russian journalists, and risked harming long-term relations.

“Current policy of the UK government towards Russia is a very dangerous game played with the British public opinion,” it said in a statement.

This “not only sends the investigation upon an unhelpful political track but also bears the risk of more serious long-term consequences for our relations”.

Asked about the case, Russian President Vladimir Putin said London must clarify its position before speaking to Moscow.

“Sort things out from your side and then we will discuss this with you,” Interfax news agency quoted Putin as saying.

Johnson had previously said the case has “echoes” of the 2006 poisoning by radiation of ex-spy and Kremlin critic Alexander Litvinenko, which London has blamed on Moscow.

May noted that after Litvinenko’s murder, which caused a deep rift in relations with Russia, Britain expelled Russian diplomats, suspended security cooperation and froze the assets of the suspects among other measures.

“We must now stand ready to take much more extensive measures,” she said, adding: “We will not tolerate such a brazen attempt to murder innocent civilians on our soil.”

May had already suggested a boycott of the 2018 football World Cup by officials and dignitaries.  The bench where Skripal was found, his home and a pub and restaurant the pair visited have all been sealed off, as has the grave of Skripal’s wife, Liudmila, who died in 2012.

England’s chief medical officer, Sally Davies, on Sunday said that up to 500 people who may have come into minimal contact with the nerve agent should wash their clothes and belongings as a precaution.

Health authorities insisted the risk to the general public remains low and Davies was “confident” nobody else was harmed, but said there were concerns that prolonged exposure to these substances may cause health problems.