Almost 1.3 per cent of the world's population has now been infected with Covid-19, the disease caused by the novel coronavirus, and more than 2.1 million people have died.

One person has been infected every 7.7 seconds, on average, since the start of the year. Around 668,250 cases have been reported each day over the same period, and the global fatality rate stands at 2.15 per cent.

Experts say the 100 million figure most likely underestimates the true number of cases, given the lack of adequate testing and contact-tracing in many countries.

Likewise, the number of deaths - more than 2.1 million people worldwide, including more than 420,000 in the United States - is probably much higher than officially reported.

The worst-affected countries - the US, India, Brazil, Russia and Britain - make up more than half of all reported Covid-19 cases, but represent 28 per cent of the global population, according to an analysis.

It took the world 11 months to record the first 50 million cases of the pandemic, compared with just three months for cases to double to 100 million.

Around 56 countries have begun vaccinating people for the coronavirus, administering at least 64 million doses. Israel leads the world on per capita vaccinations, inoculating 29 per cent of its population with at least one dose.

With more than 25 million cases, the US has 25 per cent of all reported Covid-19 cases, although it accounts for just 4 per cent of the world's population. The US leads the world in the daily average number of new deaths reported as well, accounting for one in every five deaths reported worldwide each day.

With just under 425,000 fatalities, the US has reported almost twice as many deaths as Brazil, which has the world's second-highest death toll. As the worst-affected region in the world, Europe is currently reporting a million new infections about every four days and has reported about 30 million since the pandemic began.

Britain on Tuesday reached 100,000 deaths. The Eastern European region, including countries like Russia, Poland and Ukraine, contributes to nearly 10 per cent of all global Covid-19 cases. 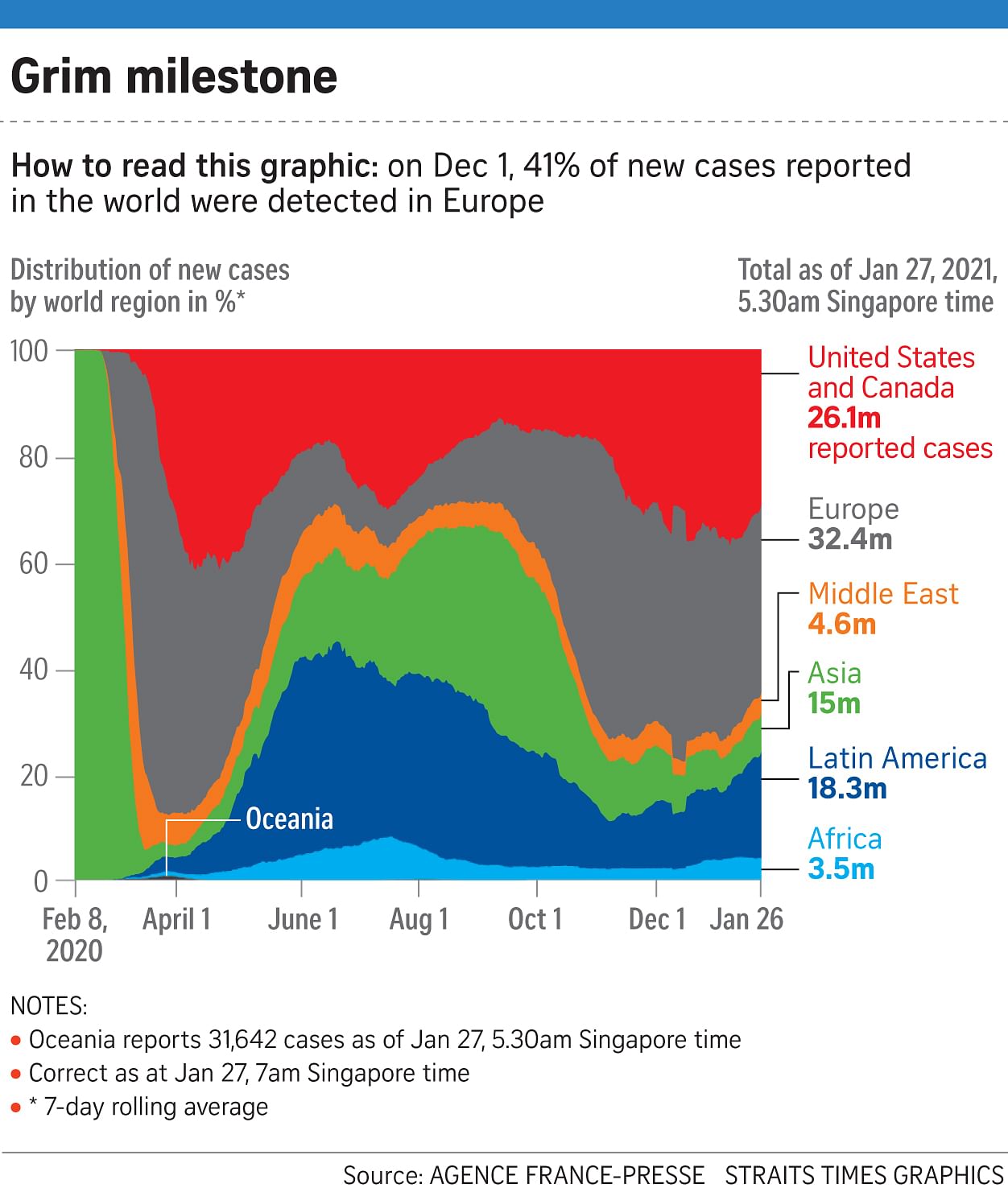 Despite securing deals for vaccine supplies early on, many European countries are facing delays in shipments from both Pfizer and AstraZeneca.

In India, the nation with the second-highest number of cases, infections are decreasing, with almost 13,700 new infections reported on average each day - around 15 per cent of its peak. Prime Minister Narendra Modi said last Friday India was completely self-reliant on coronavirus vaccine supplies, as the world's second-most populous country inoculated more than one million people within a week of starting its campaign.

China, which recently marked the first anniversary of the world's first coronavirus lockdown in the central city of Wuhan, is facing its worst wave of local cases since March last year.

As richer nations race ahead with mass vaccination campaigns, Africa is still scrambling to secure supplies as it grapples with concerns about more-infectious variants of the virus first identified in South Africa and Britain. African countries have reported nearly 3.5 million cases and more than 85,000 deaths. The South African variant, also known as 501Y.V2, is 50 per cent more infectious and has been detected in at least 20 countries.

Health experts also worry that the new variants of the virus could bring a resurgence in US numbers as they have in Britain, Ireland and South Africa. Those fears have prompted new lockdowns and travel restrictions around the world.

The International Monetary Fund now predicts a "cumulative output loss" of US$22 trillion (S$29 trillion) - the equivalent of the entire US economy - over 2020 to 2025.

Nevertheless, optimism that vaccines will bring the pandemic under control and allow economic activity to resume, coupled with stimulus measures in major economies, boosted the IMF's growth forecast this year to 5.5 per cent.

A version of this article appeared in the print edition of The Straits Times on January 28, 2021, with the headline Global Covid-19 cases cross 100m as death toll spirals. Subscribe